Once again the fans turn out in big numbers

Once again the fans turn out in big numbers

“Soccer” doesn’t always fill the stadiums in the States, but once again Barça did just that, as 70,080 fans filled the Sun Life Stadium in Miami tonight. 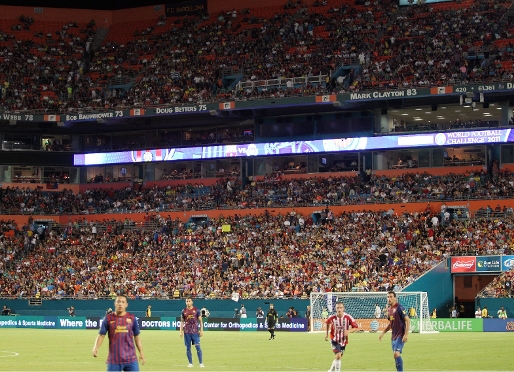 Before they began their US Tour, Barça had played two games in the Audi Cup, against Internacional de Porto Alegre and Bayern Munich at the Allianz Arena, which was packed full with 66,000 fans.
The crowd is the biggest ever for a football match in Southern Florida and follows on from the 81.807 who turned up for the game against Manchester United in Washington DC - which means that Barça have averaged gates of over 75,000 so far on the Tour.

Barça’s appearances in the States are normally well attended and in the 2009 Tour, a total of 221.557 spectators turned up to watch Guardiola’s men in Los Angeles, Seattle and San Francisco.

Impact off the pitch

The attendances at the games is just one aspect of the impact that FC Barcelona have had in the US. Deals over recent days between the Club and the Bill & Melinda Gates Foundation , the Fundació Pies Descalzos de Shakira and the coverage of the charity game organised by Mia Hamm in which Kobe Bryant wore the Barça colours , have contributed to strengthening the image of the Club internationally.