Barça’s social commitment has taken on a further global character with the agreement signed today with The Gates Foundation to work towards eradicating Polio. Mr Gates expressed his personal satisfaction at working with the Club.

More info
Barça launched another message of its social commitment today in Washington D.C. with the agreement with The Bill & Melinda Gates Foundation to end the scourge of polio. The US philanthropist praised the Club’s commitment at an event where he was accompanied by Club President Sandro Rosell and first team coach Josep Guardiola.

Bill Gates, who is now dedicating his time completely to his foundation, praised Barça’s implication in social work: “they don’t just win out on the field, they also have their values off the pitch and those are values which we share” The Microsoft co-founder also called Guardiola “a genius” and had words of support for the Club’s commitment to its youth system and the Club’s singularity: “a foundation at a football club is really something out of the ordinary”.

Rosell: “thank you for allowing us to work with you” 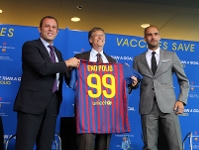 Club President Sandro Rosell explained that the deal had been agreed a month ago and went on to return the praise the Club had received from Mr Gates: “I’d like to stress his intelligence, but even more than that, his humanity and his ability to invest in other people through his philanthropic works”.

Sr Rosell continued: “I would like to thank you in the name of the Club members for allowing us the opportunity to work with you”, whilst making it clear that the Club and its Foundation were prepared to work hand in hand with the Gates Foundation in other areas beyond the “More than a goal, End polio’ campaign. “It is a great honour to be able to lend a hand here” admitted the President, who also stressed the ability of football, and particularly the global position of the Club, to communicate positive messages to children.

The power of sport

Pep Guardiola echoed the President’s feelings about the power of the game, claiming: “we know that many millions of children throughout the world look to us and we have a great responsibility. When I see what is happening in places like Somalia, it makes me happy that I am at a club which promotes the values that ours does”, Andres Iniesta and Eric Abidal also attended the event which was widely covered by the US media.