Recovery session with Jeffren back

Recovery session with Jeffren back

Barça had a recovery session on Monday after beating Real Sociedad on Sunday evening (5-0), where Jeffren worked out with the squad for the first time since getting injured. 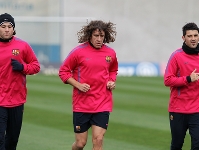 A total of 25 players trained on Monday at the orders of Josep Guardiola in the Ciutat Esportiva Joan Gamper. All of the first team, including Milito and Jeffren, who are recovering from injuries, were on the field.

As usual on days after matches, the players that started the game last night only did gentle recovery work. Jeffren Suárez, who was injured last Tuesday against Rubin Kazan (2-0) trained normally for the first time since then.

Milito, who has a femoral biceps injury in his right leg, also did some of the training with his colleagues.

Six from Barça B 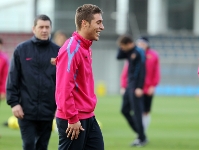 The session started with the usual warm-up drills, and featured six players from the reserves, namely Thiago Alcántara, an ever-present these days it seems, and Oier, Planas, Abraham, Rochina and Benja, who did not play in Barça B’s Sunday fixture at Albacete (2-2). 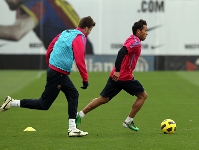 The squad will not train again until Wednesday at 17.30 at the Ciutat Esportiva Joan Gamper because Josep Guardiola has given everyone a day off before they start preparing for the derby at Espanyol on Saturday at 20.00. Before, at 16.30, Keita will be speaking to the media.