The Asia Tour 2010 is underway! The FC Barcelona party flew out for the South Korean capital from El Prat at 6 p.m. this afternoon at the start of a week long trip to Asia. 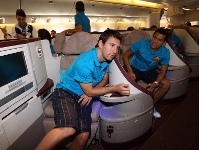 After the game in Oslo on Thursday, the squad are now off on another flight – this time to Asia , where they will play two games in South Korea and China, before returning next Sunday. Messi and Alves are on the plane after returning to the club from their holidays on Saturday. 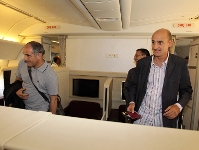 The party is made up of a total of 123 members including the 28 players in the squad, back room staff, 22 media personnel, Club Vice President Josep Maria Bartomeu, Board Members Jordi Moix, Dídac Lee and Josep Ramon Vidal-Abarca, as well as Andoni Zubizarreta. This will be the first major club trip for the five club officials.

The Turkish Airlines Boeing 777 which will fly the group to Seoul is the same plane that took the squad out to Abu Dhabi last December for the World Club Cup. Its 312 seats will allow the Barça party to travel in total comfort, given that they will only occupy one third of the available seating. The flight is scheduled to take about 12 hours to cover the 9.600 kilometres between Barcelona and Seoul. 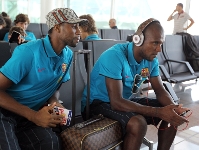 The flight was delayed by two hours and the plane is due to arrive in Korea around lunchtime. Local time, tomorrow, with the squad due to have their first training session in the evening. 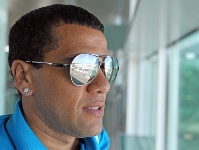 The squad are travelling without any fans, as the delay in finalising dates made it impossible to obtain visas for China in time.