28 players to make trip to Asia

28 players to make trip to Asia

Guardiola will take 28 players on the Asia Tour. Messi and Alves join the other 9 members of the first team squad with 17 players from Barca B, whilst Jeffren and Bojan, who have been called into the Spanish under 21squad, miss the trip.

After Thursday’s opening game in Oslo, Barca fly out for the first stage of their Asia Tour, which takes in games in South Korea and China and Guardiola has announced the 28 players who will make up the party. 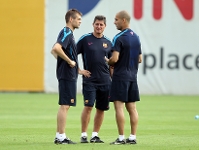 Leo Messi and Dani Alves, who returned from their holidays on Saturday, are both included in the squad alongside first team colleagues Pinto, Milito, Maxwell, Víctor Sánchez, Adriano, Ibrahimovic, Keita, Abidal and Hleb.

With the Spanish World Cup winners still unavailable, Guardiola has taken advantage of the Tour to cast an eye over a number of B team youngsters: Mińo, Oier, Ilie, Sergi Gómez, Martí Riverola, Jonathan dos Santos, Jonathan Soriano, Armando, Dalmau, Benja, Edu Oriol, Muniesa, Nolito, Sergi Roberto, and Tello all travel, as do Víctor Vázquez, Fontŕs, who are still recovering from injury, but have begun training.

Bojan and Jeffren to stay at home 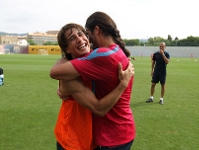 Bojan and Jeffren have both been called up for Spain’s under-21 European Championship qualifier against Finland on August 11th. The Spanish squad will meet up on August 5th and the Barca staff decided the two would be better served by staying on in Barcelona to train, rather than having to make a break in the Tour, which would mean three long trips – to Korea and back and then to Finland, in a short period of time. 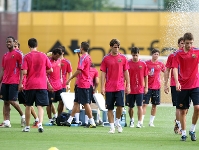