The Barça midfielder started last night’s World Cup semi final against Germany and posted a fantastic performance in which all that was missing was a goal.

In May 2009, Pedro Rodríguez was helping Barça Atlčtic to promotion to Division 2A. Just over a year later and he was the starting striker in Spain’s first ever World Cup semi final . This year has seen the Canary Islander burst into the Barça first team, and last night he was chosen ahead of Liverpool’s Fernando Torres to spearhead the Spanish attack.

From Barça to Spain 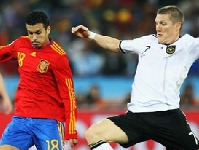 Pedrito, Pedro or Don Pedro, as he has been called, has taken his sudden stardom well in his stride. Last season he went from being an unknown quantity to being the Barça revelation , and has contributed decisive goals for Barça, while managing to stay out of the media spotlight. On Wednesday evening, Vicente del Bosque chose him as centre forward against Germany, with Pedro having only played a bit part until then with brief appearances as a sub against Switzerland (13’), Portugal (2’) and Paraguay (15’), although especially in the quarter final match, he did not go at all unnoticed.

Pedro did not disappoint in his first start for Spain. He played both attacking and defensive roles, and although he didn’t score he was highly motivated and displayed pressure, accuracy and mobility as he formed a convincing partnership with David Villa. He had the most shots out of the team, four, and two of those were on target. 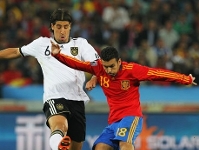 Pedro was one of seven Barça players in the first eleven. In the first half, following a long Villa through ball, his strike went straight at the German keeper, but it was an important warning. The closest he came to scoring was in the final minutes of the game, when he was one on one with the goalkeeper but waited just a little too long before shooting.

His presence meant that German left back Philipp Lahm was unable to exert his usual influence. Because of Pedro’s incision and pace, he was forced to concentrate purely on his defensive duties and that broke down one of German’s most preferred links with the forward line.

FIFA named Xavi man of the match, but when Pedro was substituted by David Silva in the 86th minute, there was no doubt that his performance had been a good one and that it had not been a mistake to give him a chance at such a vital stage of the competition. 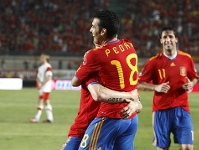 The Canary Islander has been playing second fiddle to Torres throughout the tournament, but following his excellent semi final, Vicente del Bosque will certainly be under pressure to field him again in the final against Holland. He may only be 22, but he is on the verge of going down in the history books as one of the key members of the most successful Spanish national team ever. 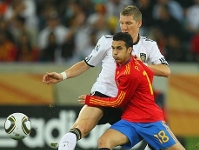 These were the player’s statistics in the semi final against Germany: