13 players have played for Milan and Barēa

Since 1997, several players have moved from Milan to Barcelona or vice versa. Michael Reiziger was the first to leave Catalonia for Lombardy, and Ibrahimovic was the last to move from the Camp Nou to the San Siro. 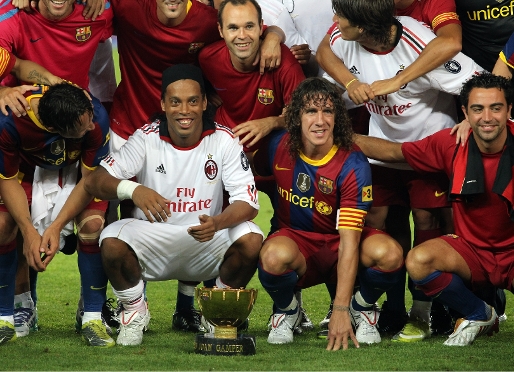 Ronaldo, Edgar Davids, Demetrio Albertini and Van Bommel are other players that appeared at some time for both clubs, although none of them moved directly between the two.
In 1997, the first deals were struck between AC Milan and FC Barcelona, and the practice has continued to the present day. In fact, Barēa have shared players with Milan more than any other European club, a total of 13. Some came to Barcelona having turned out previously for the red-and-blacks, while others moved the other way.

From Milan to Barcelona

The first arrivals at the Camp Nou from Milan were Dutchman Michael Reiziger and Frenchman Cristophe Dugarry in the 1997/98 season, the first under Louis van Gaal. Reiziger starred for the club for seven seasons, while Dugarry made considerably less impact. Another Dutchman arrived from Italy the year after, Winston Bogarde.

In 2001/02, Francesco Coco arrived on loan, but failed to win a regular place in the FCB defence and didn't win any titles in his time at the club.

From the Camp Nou to the San Siro

The first transfer in the other direction was that in 2002 of Rivaldo, who had delighted the Camp Nou for several years. In 2008, another Brazilian striker, Ronaldinho, departed in one of the highest profile deals in recent football history. He was joined by Gianluca Zambrotta, who had been at Barcelona from 2006 to 2008.

The last player to leave Barēa for Milan was Zlatan Ibrahimovic in the summer of 2010. On Wednesday he will face off against his former colleagues.