Spanish League Round Up Week 10

Spanish League Round Up Week 10

Llevant and Seville both lost their unbeaten records this weekend, leaving Barça as the only La Liga team yet to taste defeat this season. Real Madrid and Barça now occupy the two top spots, whilst Levant slip back to third. 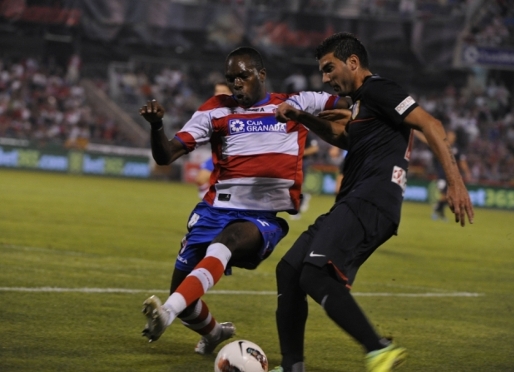 Llevant’s great winning run came to an end in Pamplona where a brave Osasuna team withstood losing two defenders to injury within the first half hour and playing the last 30 minutes with ten men to hold onto their first half two goal lead and keep their own unbeaten home record intact. With Real Madrid narrowly winning against Real Sociedad(0-1 with Higuain again on target), Llevant are now third, a point behind Barça ahead of next week’s derby game with fourth place Valencia, who beat Getafe 3-1 thanks to a brace from Feghouli and a third from Aduriz.

Getafe’s defeat means they sit bottom with just 7 points after Granada pulled off one of the season’s shock results so far, beating Seville 1-2 on Monday night. Granada came back with two late goals from Geijo and Rico after going a goal down in the first minute with Manu finding the net again. The win, their first top flight away victory in over 25 years, came thanks in large part to a fantastic performance form their keeper Roberto, though the three points only lift them one place, with Racing getting their first win of the campaign, condemning Betis to their sixth straight defeat, with a 1-0 win in Santander.

Granada, Racing, Sporting, who drew 1-1 at home to Bilbao, and Real Sociedad are all on 8 points with Zaragoza, who went down 3-1 at Atletico Madrid, on 9 alongside Mallorca. Villarreal are up to 10 points following their much needed 2-0 win over Rayo and Betis are now in 12th place, just 4 points above the drop zone.

With Seville staying in fifth, Malaga occupy the sixth European spot after beating Espanyol 2-1, leaving Pochettino’s team a point and a place behind.