Llevant stay top after the midweek matches, but only just -after an injury time winner against Real Sociedad. 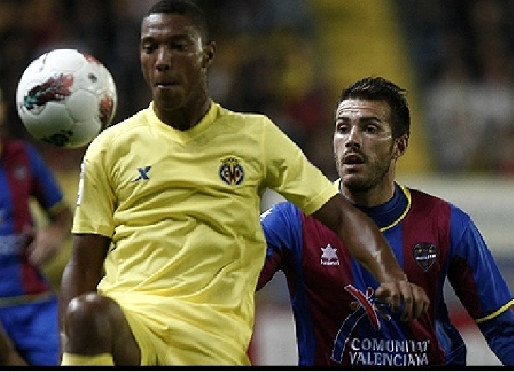 Llevant left it late on Wednesday night with a 93rd minute winner from Ruben Suarez after Real Sociedad had put up a brave fight, going one up early on and coming back after Llevant had scored twice in the second half to leave it at 2-2 on 90 minutes. Llevant boss Juan Ignacio Martinez said after his team’s seventh successive win: “this is a nearly impossible run we are on”. Real Madrid also kept up with the pace, seeing off Villarreal with three first half goals from Benzema, Kaka and Di Maria and remain a point behind Llevant and one ahead of Barēa.

That defeat for Villarreal sent them down into the bottom three, with just seven points and only one win in the last eight games. To make matters worse, they have also lost striker Giuseppe Rossi for the rest of the season after the Italian was operated on for a knee ligament injury on Thursday. Villarreal are third from bottom on seven points, with Granada in last spot on five, level on points with Racing, who got an unexpected point in Seville with their 2-2 draw. Manu del Moral scored twice for Seville, with a 91st minute equaliser after Racing had scored twice in the second half to come tantalisingly close to their first win of the season.

After two successive draws, Valencia were back to winning ways with a late Jordi Alba goal giving them a 0-1 win at Zaragoza to lift them ahead of Seville into fourth place, three points behind Barēa. Espanyol are sixth after their third win on the run, beating Betis 1-0 thanks to a Walter Pandiani goal, which means Betis have now lost five on the row and slumped down to tenth. Another of the early season pacemakers, Malaga also lost their third game on the run, going down 2-0 at Rayo, with Raul Tamudo on the mark for the hosts’ second. Malaga are now seventh on 13 points, with Rayo on 12 in ninth place level with Bilbao, who thrashed Atletico Madrid 3-0 at San Mames with two goals from Fernando Llorente.

Mallorca go down ahead of Camp Nou visit

Mallorca didn’t make the best preparation for their trip to the Camp Nou at the weekend, going down 1-2 at home to Sporting, despite taking the lead early on through a Castro goal. Bilic and an own goal from Joao Victor gave Sporting their win, which takes them out of the bottom three, ahead of Villarreal on goal difference and also level on points with Getafe, who were held 2-2 at home by Osasuna.