Javier Mascherano spoke to the Barça TV programme “El Marcador” after the Seville game and explained his reconversion into a centre half by claiming: “I try to combine commitment and concentration”.

In less than a year and a half as a Barça player, Mascherano has become a firm favourite with the fans, as a result of his performances on the pitch and his attitude off it. After his brilliant game at the heart of the defence against Seville on Saturday night, he spoke on Barça TV and explained: “I never imagined this - to be playing as a centre half just a year after coming here, a Champions League final, a Cup final…” 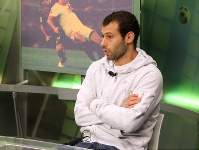 Mascherano is clear that he will play wherever Guardiola asks him to: “looking at how the boss has used me, he seems to prefer me at centre half, rather than in the middle. Maybe that’s down to the injuries we’ve had at the back. I just try and do my best - I know I have a few problems-it’s not my natural position, I’m not that tall, but I try and overcome that by trying to combine commitment and concentration. Opportunities are there to be grasped and taken advantage of”.

Disappointed with the result

Reflecting on the Seville result, Mascherano explained: “it’s a strange feeling – disappointment at not getting the three points, but satisfaction at knowing we did everything right. We played as we always do –attacking for almost the whole game”. The Argentinean also warned that: “it might have seemed easy to win the league last year if you were looking from the outside, but it certainly wasn’t and the other players have told me that the previous titles were just as hard to win”.

Mascherano also commented on his teammate Leo Messi, who missed that late penalty: “he’s sad about not wining, but he’s okay with things. The most important thing is that you can finish the game and look your teammates square in the face without regrets. If you take the penalties, it’s you who’ll miss them – for the rest of us it’s impossible!”.