Gerard Piqué joined in for part of the training with the rest of the squad on Sunday morning, as the players worked out following Saturday night’s draw against Seville. 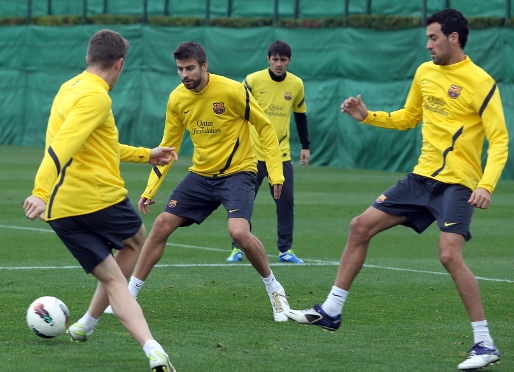 With the trip to Granada on Tuesday their next game, the Barça squad were back at work this morning at the Ciutat Esportiva Joan Gamper, where the stress was on recovering from Saturday night’s efforts against Seville in a generally gentle session.

Gerard Piqué provided the positive note at the session, joining in part of the training as he continues to recover from the muscle injury he suffered against Racing last weekend.

Alexis and Puyol also appeared at the session –working apart from the rest of the players, as they too continue to get over their injuries – Puyol was rested as a precautionary measure for the Seville game with a groin twinge.
As well as the youngster Isaac Cuenca, who trained with the squad on Saturday, three of the B team players who were not called up for the game against Alcoiŕ - Gustavo Ledes, Sergi Gómez and Oriol Rosell also took part.