Alves: "Only those who shoot can miss"

Alves: "Only those who shoot can miss"

The Brazilian full-back minimized the importance of Messi’s penalty miss in the 94th minute, at the same time emphasising the courage of Leo, taking on such a responsibility. "Only those who dare to shoot can miss" he said. 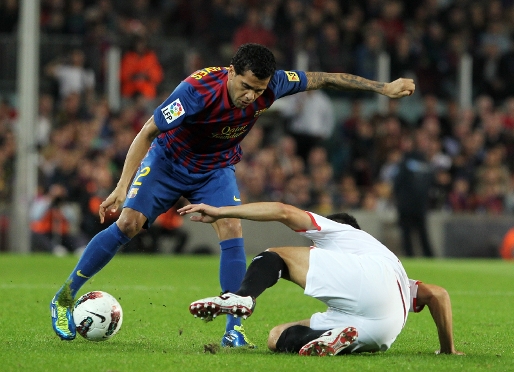 It was the day when Xavi played his 391st League game in a Barça shirt, equalling 'Tarzan' Migueli’s record. It was also the day when Valdes beat his own personal record without conceding a goal, established last season, and he’s now gone 607 minutes without letting in a goal in an official match. But undoubtedly it wasn’t Barca’s day, as they came up against a superb Javi Varas.

"It's been a really tough game, and Sevilla’s defensive play was extraordinary. We played well, but there are days when the ball doesn’t want to go in" Dani Alves said. Seydou Keita had similar thoughts: "We just lacked a goal, but we played well and created good chances. At times these things happen. What's really important is that we tried everything to win".

The Mali player had words of praise for Messi, after he missed the penalty: "Leo is a guy who always helps the team, and always tries to score goals. Now we have to help him, because he’s an amazing player".

"In this type of games you feel bad. We tried everything, we had chances, but their keeper was sensational".

"Penalties are missed by those players who take them, and Leo will carry on taking them, and scoring".

"My unbeaten record is secondary for me. What I always want is to win, and today we didn’t, so there’s nothing to celebrate”.

"Varas has saved everything. He’s had a spectacular evening".

"At a personal level, every day I feel better, and I try to help the team the best I can, whether as a winger or a full-back".