Cesc cleared to play on Saturday

Cesc cleared to play on Saturday

The second to last session before taking on Sevilla featured good news about Cesc. The midfielder has missed three games through injury, but will be OK for Saturday. Alexis and Piquť exercised in isolation.

More info
Cesc Fŗbregas is fit again. On Friday he was given the medical all-clear after being sidelined with a hamstring injury since a training session on October 1. He has missed three games for FC Barcelona (Sporting, Racing and Viktoria) as well two internationals for Spain. 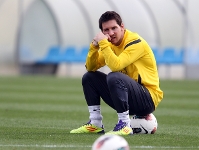 Cesc back, Guardiola is now only missing three players in Piquť, Alexis and Afellay. Cesc was on great form before getting injured, with 5 goals in 9 games and was offering certain midfield options that were unavailable to the manager before.

Other than Cesc Fŗbregas, there were another 19 players present at the Ciutat Esportiva 18, including Isaac Cuenca of BarÁa B, who made his European debut last Wednesday. The injured Alexis and Piquť both continued recovering from their respective injuries.