“We want to make more history”

Messi: "We’ve already made history, but we want to make more”

Leo Messi is only worried about winning things with the team and not individual accolades. He also says that he is as hungry as ever to continue making history at Barça.

The Argentinian doesn’t think of football in individual terms and certainly doesn’t feel he is in competition with players like Cristiano Ronaldo: "Those things are for journalists, I have no challenge against him and I’m only interested in helping my team-mates carry on winning”.

After overtaking Kubala, Messi is now just 39 goals from beating César and becoming the highest goalscorer in Barça history, but claims not to be thinking about that. "Beating César is not my aim. The more goals I score, the better, not to break the record but to win titles for the team, That’s what I’m interested in, because that would make history for everybody. We have already made history, but we want to make more. " 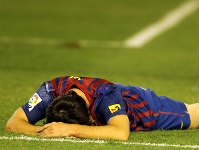 Barça have yet to be awarded a penalty this season, despite there being four very strong cases for fouls in the area on Messi. Not that the player himself is overly concerned. "These plays are very quick and hard to spot, and we shouldn’t take too much notice of them. The more we talk about it, the harder it gets for referees and we should leave them alone”.

The new Masía opens on Thursday, and the Argentinian spoke of his own memories in the youth teams. "I never lived in the residence, but I ate there every day and have many memories of the place. It helped a lot with my adaptation and I’ve seen the new building and it’s amazing, spectacular.” He also spoke about the revelation this week that he shares an ancestor with Bojan: "I was surprised by the story you published, but I haven’t spoken to him about it” he said.