The French international has said his agent is meeting the club on Thursday and that his intention is to stay at Barça for another two years.

Éric Abidal is one of the jokers in the FCB pack. This was evident at the Ciutat Esportiva today, when the Frenchman, once the session was over, helped the team’s press officer by announcing the forthcoming schedule for press conferences and training sessions.
The last time Éric Abidal gave a press conference, he spoke very sincerely about his contract situation. He made it clear that he wanted to get back to the same level of fitness that he showed before his liver tumour operation before negotiating his future at FC Barcelona. On Monday, Abidal was in front of the media again and said “I’m perfectly healthy and I’m trying to show that on the pitch”.

Abidal explained that his agent will be holding talks with the club on Thursday to discuss his renewal. There is no agreement yet, but the Frenchman said that “it is not a problem with money, it’s about seasons”, saying that he would like to sign for two more years. It is his desire to continue defending the Barça jersey and “I am sure that we will reach an agreement”. As Abidal has often said in the past, “my idea is to carry on playing here, because it’s the best club in the world”. 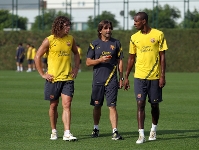 Abidal was injured in Gijón, just before the international break. He went to France regardless and missed the first match because “it was hurting” but did play the second because “I didn’t have any problems.” Abidal insisted that “we are intelligent when we feel pain. We think it is best to rest for a few days and then get back to training. Because if you carry on training then the injury could end up lasting longer … the season is long and we all have to be at our best.”

In the game against Racing Santander, Éric Abidal almost scored a cracking goal from a bicycle kick. “If I’d connected right, it would have gone in”, he said, while a screen in the pressroom showed a replay of the action.

But the Racing Santander game is now history, and the team is preparing for the European fixture with FC Viktoria. Abidal knows that there are no easy games in the Champions League, and that the back-to-back encounters with the Czech outfit are important because “there are six points at stake, and if we get them we are in the last sixteen”.