Barça have not lost for 12 games, which equals their record in the 2009/10 season. The run started with the Supercup games against Madrid. 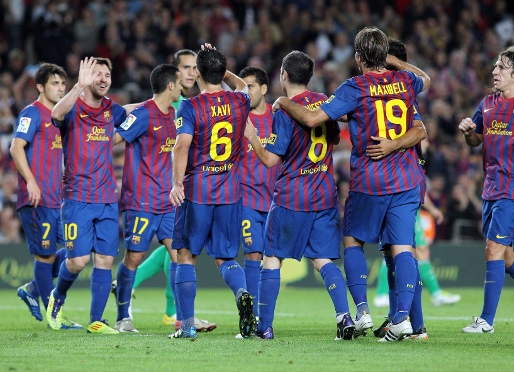 One of Barcelona’s Champions League rival, AC Milan, also won their league fixture yesterday. Maximiliano Allegri’s side beat Palermo (3-0) with goals from Nocerino, Robinho and Cassano.
► Barça have equalled the record they set in 2009/10 for after beating Racing Santander they have now gone 12 games unbeaten, including the three Supercup matches, seven Liga games and a couple of Champions League fixtures.

►Éric Abidal won the most balls in last night’s game, a total of 18.

► Barça top the league with 17 points, and are still the highest scoring team with 26.

► Having scored twice against Racing, Messi has now scored 196 goals in official appearances for Barça, which means he overtakes Kubala. The Argentinian is now the second highest goalscorer in club history, only bettered by César, who got 235.

► Between this season and the end of the last, Barça have gone 7 games without conceding a league goal.

► Barça only made 5 fouls against Racing, while the visitors committed 17.

► Xavi has scored in three consecutive league games. He scored against Real Sociedad, Osasuna and then Racing. The header against the Cantabrians marks his best ever start to a season in terms of goals scored.