Few adjectives remain to explain what Messi, the best footballer on the planet, does on the pitch. Messi has scored 14 goals in 11 games. Brutal statistics. 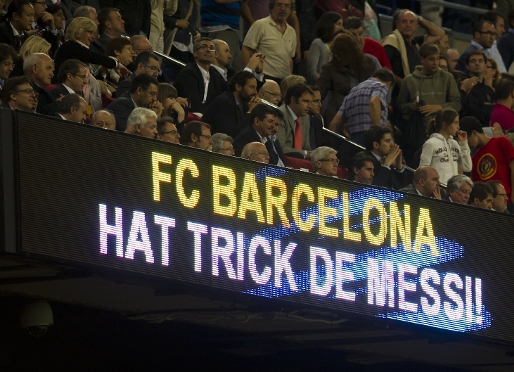 14 goals in 11 official matches. Top goalscorer in the current League season, a player who has scored more goals in the history of the Spanish Super Cup, second top scorer in Barça history, tied with the legendary Kubala, and in the Champions League he’s already amongst the twelve players with most goals scored this year, and it’s worth remembering that Messi was top scorer in the Champions League for the last three seasons. 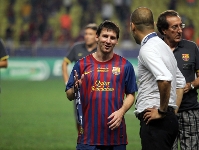 Messi still has some personal challenges remaining. For example, do the same as another Barça player, Pedro Rodriguez, did during the 2009/10 season. Pedro scored goals in all competitions (Spanish Super Cup, European Super Cup, League, Spanish Cup, Champions League, and World Club Championship). Up to now Messi has covered four of the six possibilities. He scored 2 goals in the Spanish Super Cup against Real Madrid, 1 in each leg, 1 in the European Super Cup against Porto, 2 in the Champions League, both in Minsk against BATE, and in the League the superstar has scored 8 goals in 6 games.

He just needs to score in the Spanish Cup and the World Club Championship, which he may well do before Christmas. 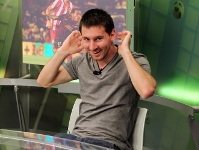 Messi has already taken 2 balls home with him, signed by his teammates. Against both Athletico Madrid, and Osasuna, both at matches at the Camp Nou, Messi scored three goals. He now has 11 hat-tricks since he became a first team player. Messi has scored twice in 2 games, once in the league against Villarreal, and again in the Champions League against BATE. With these stats it’s logical that Messi heads the ranking of top scorers in the League.

The only things remaining to him, to complete the scoring circle, are to score in the League away from the Camp Nou, and to score in the Camp Nou in the Champions League. In the first case, Messi will not be able to do this until the 25th or 26th of October, in Granada, whilst on the 19th of this month, he could score his first goal in the Champions League at home this season, with the game against Viktoria Pilsen.
For the moment, the goal scoring machine will try to do his thing in an Argentinian shirt, against Chile and Venezuela.