Another international break means the Ciutat Esportiva is about to become a lonelier place. No fewer than 14 players are leaving today and won’t be back until next week. 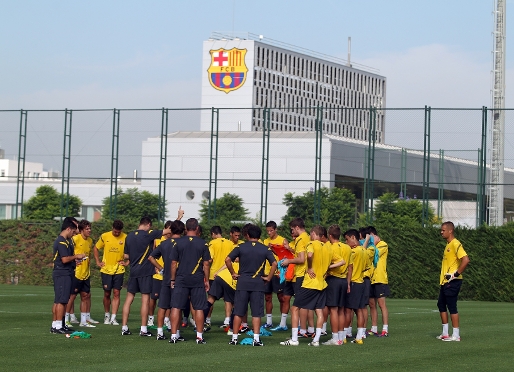 Éric Abidal will be joining ‘Les bleus’ after the French Federation’s doctors decided that the injury he picked up at El Molinón is not serious enough for him to have to return to Barcelona and recover. The French play Albania on the 7th, and four days later meet Bosnia.

Argentina are about to start on the road to the 2014 World Cup in Brazil. Their first games are against Chile, who are missing the injured Alexis Sánchez, and Venezuela, and the squad includes Messi and Mascherano. Like the other countries, the South Americans play on October 7 and 11. Mascherano will not be able to play in the first of the two fixtures through suspension, and will therefore be joining the national squad later.

Vicente del Bosque has called on eight players, Valdés, Piqué, Puyol, Thiago, Villa, Pedro, Xavi and Busquets for the world champion’s games against the Czech Republic and Scotland. Spain have already qualified for the European Championship, and so there is only honour at stake, although both their opponents still have a chance of making the playoffs. The injured Iniesta and Cesc both miss out.

Alves and Adriano for Brazil

As host nation of the forthcoming World Cup, Brazil do not have to play qualifying matches, and are organising friendly matches instead. The five-time world champions will be playing Costa Rica and Mexico this week, and both Alves and Adriano are in the side.

Keita back in Mali

Meanwhile, Seydou Keita has an African Nations Cup qualifier on Tuesday for Mali against Liberia. The African continental championship will be played in February 2012.

Bartra not in Under 21s

Marc Bartra has not been included in the Spanish Under 21 squad to face Croatia on the 6th, but Carles Planas and Martín Montoya have received call ups from Luis Milla.

All back on October 13

Assuming all goes to plan, the 14 first team players will all be back in Barcelona on the 13th. Barça have a game on the Saturday after at the Camp Nou against Racing. Guardiola will only have three sessions, Thursday, Friday and Saturday morning, to prepare his players for that meeting with the side managed by Argentinian Héctor Cúper