Ibrahim Afellay was operated on successfully on Monday afternoon by Doctors Ramon Cugat and Ricard Pruna who used keyhole surgery to reconstruct the player’s damaged ligament. Afellay is expected to be out for a further six months.

Affelay suffered the injury in training on Thursday September 22nd and today he was operated on successfully by Doctors Ramon Cugat and Ricard Pruna, who later gave a press conference at the Club to explain the operation and the six month recovery programme the Dutch forward will have to undergo. 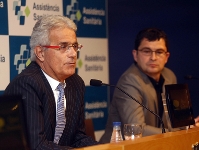 Dr Cugat explained that the operation had lasted for 50 minutes and that it had been scheduled for today: “because we felt it was prudent to wait for ten days. He’ll now be about three or four days in the clinic with his knee immobilised and then we will begin the physio for his recovery. We’ll take the bandages off in a week’s time and he will be able to start to use is knee”.

Doctor Cugat revealed: “he was really upset on Friday and in a lot of pain. He’s been getting gradually better in himself and he was upbeat today, which is an important factor. He is clear that what we have to do is fix his knee”.

Ricard Pruna then commented that: “Affelay has complete confidence in the Club’s medical services and we will guide him through his recovery. Once the critical part of his recovery is over –in two or three months- we will be prepared to give him a break of between 10 and 15 days to be with his family as long as things are going okay with his knee”.

Dr Pruna explained the recovery process from this type of injury: “for the first two months he’ll be doing physio work to help his mobility, in the third and fourth months he’ll be very active in the gym and then it’s a matter of doing strengthening activities to get him ready for getting back on the pitch”.

Iniesta set to come back

Dr Pruna also spoke of the muscle injuries that have affected a number of the squad members and insisted: “it’s completely normal in a team as demanding as Barça. We shouldn’t get it out of perspective; we have preventative measures before, during and after the training sessions. We have to trust ourselves, keep working hard and that will help bring us the success we have had in other years”. The doctor also denied that there was any connection between the injuries and the team’s pre-season tours.

Finally, Dr Pruna revealed that Andres Iniesta “is on the point of being given the medical all clear”.