"We have to realise what we’re playing for"

Guardiola: “We have to realise what we’re playing for”

The manager has warned that BATE Borisov could be a difficult opponent, and that after the draw with Milan at the Camp Nou, “if we don’t win here we will have to wait till the last day to guarantee qualification”.

Josep Guardiola was speaking to the press ahead of the Champions League encounter on Wednesday night with BATE Borisov. He said he has much respect for the early rounds of Europe’s premier club competition, because “in this group they are making a lot of assumptions … but my experience reminds me of the shocks we’ve had at these stages … If we are shocked now, then we’ll have to suffer right through to the end”.

The 2-2 draw with Milan at the Camp Nou has no doubt conditioned the urgency with which FC Barcelona are approaching the match. “If we don’t win here we will have to wait until the last game to see if we qualify. We have to realise what we are playing for tomorrow, because it will be a big step forward if we win.”

Asked about BATE Borisov, Guardiola said he has much respect for the Belarusian side, and “it is not the first time they have played in the Champions League … They have experience of competitions like this. They are a team that is used to winning, they are well prepared, they have potential and last year caused some surprises. They are very strong physically, strong in the air and we will have to be orderly in attack, that’s always our objective … we have to know where our spaces are, to be patient, and to realise what we are playing for.” 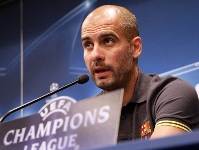 Asked to clarify his words after the Atlético Madrid match, where he said he was sorry that members of the previous Board of Directors are facing a legal issue with the club, Guardiola said that his concern is entirely focused on the “eight families that have been suffering a delicate situation because of 15 days that have nothing to do with them” in reference to the final days of the 2002/03 season. Guardiola said “I have always been able to work in total freedom with both Laporta’s Board and also Rosell’s”.

Guardiola also said that he often speaks to Sandro Rosell, and that they did so for quite some time on Sunday. “I didn’t intend to upset anybody” he said in reference to what he said on Saturday, and on his relations with the current board, he said “I always felt supported at all times, and I still do now … Everything being done now and everything we did before is purely to make the club better and better. It may not seem so, but the two presidents are much more similar than people think. Sometimes I think that they are both the same side of the same coin.”

The Barça manager thinks that what really matters is for “people who run the club at any time to do what they think the people who love this club want. Ever since I’ve been here I’ve sensed that they are working to make this work. We all want Barça to win, the presidents the players and the coaches. Ultimately the aim is for Barça supporters to enjoy the way their team plays.”