The first team has arrived in Belarus, where the play their second Champions League group match against BATE Borisov on Wednesday evening. The squad touched down at Minsk airport at 13.25 CET (one hour more in Belarus). 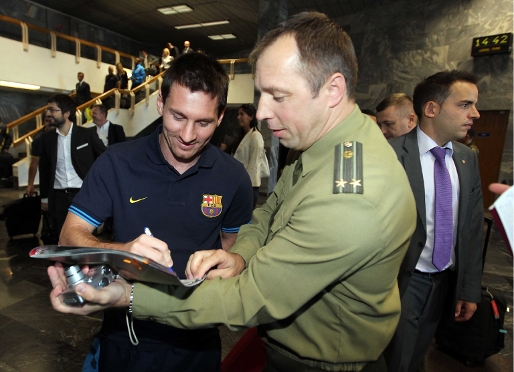 More info
Josep Guardiola’s side are fully concentrated on their European fixture against BATE Borisov. After training at the Ciutat Esportiva on Monday, they set off bright and early for Minsk on Tuesday morning, where they will train in the evening. The flight left a little late, and arrived in a sunny Belarus at 13.25.

As well as the 20 players that have been named in the side, the group was also joined by president Sandro Rosell, the secretary and spokesman for the Board Antoni Freixa, and directors Jordi Moix, Eduard Coll and Silvio Elías. The sports director for Professional Football, Andoni Zubizarreta, was also on the plane.

The day started early for the group. They left the Camp Nou at 8.15 for a transfer to El Prat Airport. The flight was due to leave at 9.00 but there was something of a delay and they didn’t land in Belarus until 13.25, where they were taken from the airport to their hotel.

At about 17.45 CET, Josep Guardiola and Javier Mascherano will be speaking to the press about Wednesday night’s encounter. Then at 18.30, the players will train at the Dynamo Stadium in Minsk, their final session before the game between FC Barcelona and BATE Borisov on Wednesday night.