Travelling, the order of the week

Travelling, the order of the week for the first team

Barça face a week full of activity and travelling is the order of the week. On Tuesday the team will travel to Belarus to play the next game in the Champions League, and Sunday they’ll travel to Gijón, for the next Spanish League match. 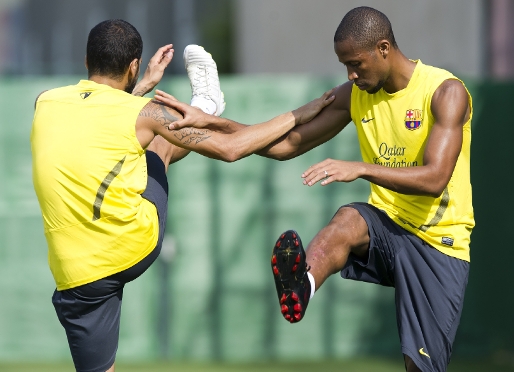 Following the 5-0 win against Athletico Madrid , and having enjoyed a rest day, the group led by Josep Guardiola will start a week in which the scheduled training sessions will be planned around the travelling that the team will have to do in the Champions League and League.

The First Team will be back at training on Monday in a session scheduled to start at 11.00 at the Joan Gamper training ground. Activity on Tuesday will begin very early in the morning The Barça expedition is expected to leave the Camp Nou at 8.15 to start the journey to Minsk (Belarus), where on Wednesday (20.45) they’ll face Bate Borisov in the second round of the group stage of the top European competition.

On Tuesday, the squad will train at the Dynamo stadium from 19.30, and the corresponding press conferences will take place. After the game on Wednesday the squad won’t travel back to Barcelona until Thursday, when they’re scheduled to set off at 11.00.

Two training sessions before the match against Sporting

On Friday and Saturday, the weekly planning will include training each day, scheduled for 11.00, to be held at the Ciudad Deportiva Joan Gamper. As usual, the day before a match, Guardiola will appear before the media at the press conference prior to Sunday’s match against Sporting Gijon.