As the winner of the last edition, the Argentinian has cast the first vote for the FIFPro 2011 Awards. He was one of six players in the 2010 All Star Team.

Leo Messi has cast the first vote for the FIFPro 2011 Awards, which recognises the best player in the world and the best eleven, promoted by the World Association of Professional Footballers. Last year’s winner posted his vote at the Ciutat Esportiva Joan Gamper in the company of representatives of AFE and FIFPro. 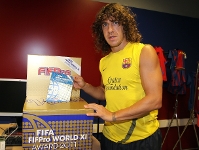 Other players, who were there for training, also took advantage of the moment to cast their own votes. 45,000 footballers from around the world will vote for the best player and team of 2011.

Apart from Messi, there were another five FCB players in the FIFPro ideal team of 2010: Piqué, Puyol, Iniesta, Xavi and Villa. All six attended the presentation ceremony in Zurich.