Xavi Hernßndez has admitted that "I am very happy with Cesc. I think his presence on the field improves my footballö.

Xavi also spoke about the three main points on the agenda for next Saturday’s assembly. "I agree with a section for young fans. It’s a good initiative, as long as there is no violence. That section will generate enthusiasm. This is the best moment ever in Barša history and now is the time for initiatives like this.” On advertising Qatar, Xavi feels "the club has needs and the Qatar publicity helps. And Qatar is clearly developing as a country and its foundation is trying to do good for everyone. I think it’s good for their image and also for ours”.

As for banning smoking in the Camp Nou, Xavi said "I have no opinions on that. The members should decide. Personally, I have no opinion either one way or the other”.
Cesc and Xavi are clearly compatible. Cynics had suggested that there was no room for two in the same side, but they have been proven wrong in dramatic style. "I and we are very happy on the pitch. I think we complement each other quite well. I he goes up I stay back and cover for him or vice versa. We have shown that many times this year. I think Cesc makes my football better” said Xavi today.

Asked about the system that has been used in recent Liga matches, Xavi said "this system is quite good. Considering we are a team that maintains a lot of possession of the ball, it is a good idea to have an extra man in the middle … It does make it harder in defence, but I think it is better to be balanced towards having a stronger midfield. I think we’ve dominated all of the games so far this season, and have done so well ". 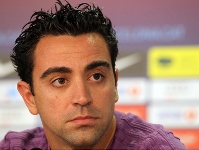 Not a two-horse race

Xavi also thinks it is important to note that neither Barša nor Madrid have won all of their games. "I don’t think there are only two teams in this league. The other clubs train very hard, they have quality, strategies, fitness and talent. Saying that is a cruel insult to many good professionals. We are all very close here, and I don’t believe in a bipolar league".

The draw at Mestalla

Xavi said that anything can happen at Mestalla and that "we could have come back with all three points, but it’s also true that Valencia could have won the game in the first half. It was a very nice, dynamic match, with constant changes of tactics and goals. For example, there was at least one clear penalty on Messi and so, although I don’t like to draw, a point isn’t bad given the circumstances”.

As for referees, Xavi made it clear that "they have a very difficult job. They have to make decisions in a tenth of a second and suffer like we do. They do the best they can, they are human, and also have the right to make mistakes, just like we do”.