This Thursday marks the 40th anniversary of FC Barcelona becoming the outright holders of the Fairs Cup trophy on September 22, 1971, thanks to a 2-1 win over England’s Leeds United at Camp Nou. 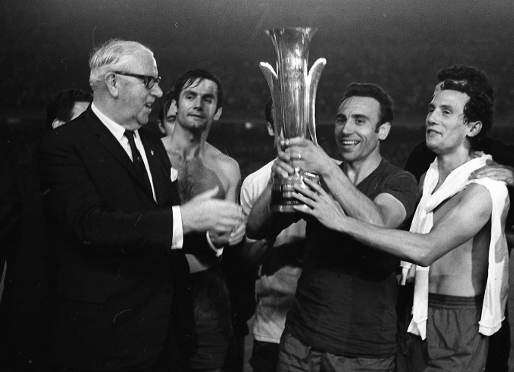 At the end of the 1970/71 season, UEFA decided to change the Inter-Cities Fairs Cup, which had been competed for annually since 1955, to the UEFA Cup (the modern day Europa league). To decide who should keep the trophy outright, it was decreed that a match would be played at the Camp Nou between the first ever champion Barça in the 1955-58 edition and also the team with the most titles, three, and Leeds United, who had just won the final edition in 1971. 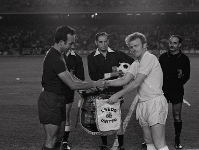 The Trophy Play-Off was organised to coincide with a UEFA Congress in the city. Before the match, FIFA President Sir Stanley Rous presented silver insignias to the members of the 1958 title winning Barcelona side. The date was September 22, 1971 and the Camp Nou was only half full, with an attendance of 45,000.

Dutch manager Marinus Michels has just taken over at the club and fielded a team of Sadurní, Rifé, Gallego, Eladio, Torres, Costas, Rexach, Juan Carlos, Dueńas, Marcial and Asensi (Fusté, 79) against a fearsome Leeds United side graced by the likes of Jack Charlton, Bremner, Lorimer, Jordan, Giles and Hunter. 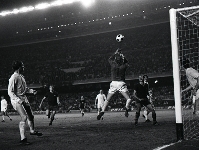 The game lived up to expectations. After a goalless first half, Teófilo Dueńas found the back of the English net in the 51st minute after a cross from Marcial had rebounded off the Leeds bar. The Yorkshiremen equalised just two minutes later through Jordan, who pounced on a Sadurní deflection after a Lorimer free kick. The game was anyone’s for the taking, but with extra time looming, Dueńas beat Leeds keeper Sparke from another Marcial assist to make it 2-1 and win the trophy outright for the Catalans.

Rifé was presented with the Noel Beard Trophy and nobody could argue that Barça were worthy winners. They had won the playoff, they had won the trophy a record three times (1958, 1960 and 1966), including the inaugural edition, and had also appeared in the competition more than any other club.