Guardiola gives his support to Qatar

Guardiola gives his support to Qatar

At the press conference prior to the away game in Valencia, the manager was positive about the Board’s decision to bring the debate about advertising on the shirt to the Assembly on Saturday, and stressed the values of the Fundació.

The boss expressed his satisfaction with the board’s decision to ask the members representatives to decide on the Qatar sponsorship issue: “it’s very good that we debate this and also a very good decision of the board’s to let the members decide on it. It’s one of the healthy democratic values we have. I can tell you that I lived for two years in Qatar and my family and I received wonderful treatment. Qatar is opening up to the Western world and I know the efforts that the Fundació is putting in to do some really good things. I think that we often don’t understand the Muslim world –nor they us". 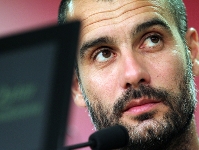 He carried on by saying: "Qatar is on a roll right now, with the World Cup going there, and their bid for the Olympics, and that is the result of an extraordinary effort that the country is making to open itself to the world, whilst maintaining its own traditions".

"The most open country in the Islamic world"

Guardiola said "These are difficult times and the board has the obligation to search for alternatives. Qatar is the most open Muslim country and the closest to the Western democracies, but they need time".

Guardiola concluded by saying: "If the members decide to continue, then we will still have the sponsorship of a foundation which is doing things for research and for culture. If not, then we will move ahead with different resources. Whatever happens, the players will continue to run and fight, which in the end is the most important thing".