There’s a great understanding grown up already between the two Barça men - and it’s getting more productive with each game they play. On Saturday the two combined for three of the team’s eight goals against Osasuna. 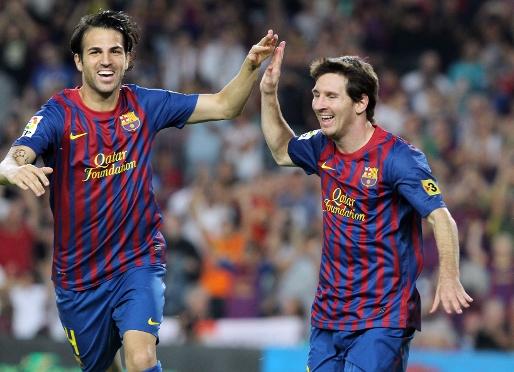 Both the Argentinean and the Catalan are enjoying a sweet moment of form, Messi has scored nine times already this season and is the team’s leading marksman, followed by Cesc on four, but it’s not just the goals that are thrilling the fans –it’s the connection between the two that is really exciting.

Osasuna face the duo at their best

The understanding between the two was clear to see on Saturday. For the team’s second goal, Cesc laid the ball off with his chest for Messi and ran into the box where the Argentinean delivered a lovely ball over the defence which he volleyed past the keeper. For the fifth it was Fabregas who turned provider for Messi to score and a great one-two between them helped set up Messi’s third as he waltzed through the Osasuna defence.

Naturally enough, Cesc’s first league goal came from a great pass by Messi as he dribbled past Diego Lopez to score Barça’s second in their 5-0 trouncing of Villarreal at the Camp Nou.

One of the highlights of the pre-season was at the European Super Cup final in Monaco, when Messi sent a dream pass through to Cesc, one of the few players who would have anticipated it, and the number 4 scored a wonderful goal.