The Barça midfielder reckons that the idea that the Spanish League is just between the big two is false: “all teams do their best and try to win”. Thiago also expressed his satisfaction at the way his role in the team is developing.

There’s plenty of debate as to whether the Spanish League has become a two horse race between Barça and Real Madrid, but Guardiola’s team have dropped points in Anoeta and Madrid lost in the Ciutat de Valčncia on Sunday and Thiago reckons : “it’s a big lie that this is a league of two teams – the others come along and do their very best and try to win”.

Reflecting on the games against Real Sociedad and AC Milan, Thiago concluded: “we are used to getting good results and it’s strange to get two draws on the run – but really that is normal in football”. 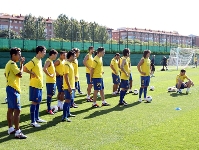 Thiago has enjoyed an increasingly important role in the team –especially when the team play 3-4-3 (or as he reckons a 3-5-2 formation) and he claims: “I haven’t found it hard to adapt myself to a more defensive role. I train to ensure I get a place in the team, play minutes and help my teammates. I’m just happy to do what the boss asks me to. The advantage of the formation we are using is that we get more players in the middle and keep more possession”.

Thiago also reckons that the competition for a place in midfield in the team is a good thing: “we are all different players and if we can click together that will help us make a great team. Cesc has really come into the team well and he is a great player. His ability to leave his marker is something not many have and he is really good in front of goal”.

Finally, Thiago insisted that the most important thing for him right now is: “I want to enjoy football, come along happy to the training sessions and have a good time there”.