Piquť working with the rest of the squad

Piquť working with the rest of the squad

Gerard Piquť took a full part in this lunchtimeís training session ahead of the midweek trip to Mestalla. A total of 19 players from the first team squad and four from the B team took part in the training.

More info
Following Sunday’s rest day after the 8-0 win over Osasuna, the squad trained at the Ciutat Esportiva Joan Gamper this lunchtime and began preparing for the trip to Valencia this Wednesday(22.00). The good news for Pep Guardiola was that Gerard Piquť played a full part in the session. 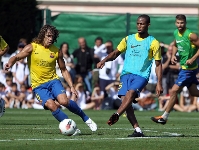 Piquť suffered a calf injury during training for the Spanish Super Cup on August 23rd and since then he has been working out on his own. On Saturday he took part in the session before the Osasuna game with the rest of the players.

19 first team players and 4 from the B team

Andrťs Iniesta and Alexis SŠnchez, who are both injured, worked on their recoveries apart from the rest of the players.