Abidal and Alves reach 100 mark in the league

Abidal and Alves reach 100 mark in the league

Both Éric Abidal and Dani Alves both made their 100th league appearance for the Club against Osasuna on Saturday night. The Frencman has taken four seasons to reach his century, whilst Alves has taken three. 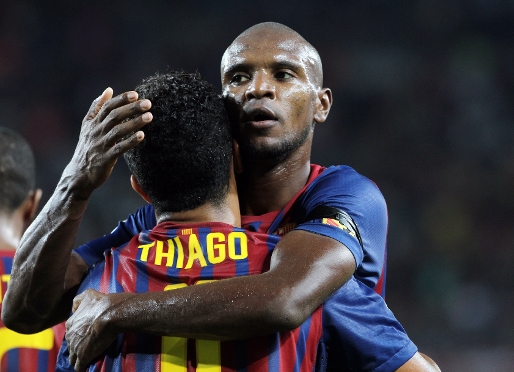 The 100th performance of the two has come a little later than expected – both finished last season on 98 appearances, but Alves missed the Villarreal game and Abidal the match in Anoeta, so it was this Saturday at the Camp Nou that they both made it 100 games.

The two have been given very different roles by Guardiola, with Alves the more attacking figure - he was actually used as an out and out winger against Osasuna and has so far scored ten league goals in his time at the Club, whilst Abidal is a defensive bulwark –switching between full back and central defender - and although he has scored in the Cup he’s yet to get off the mark in the league.

Gerard Piqué will probably be the next Barça defender to reach a hundred league games –he’s currently on 88 – whilst his centre back partner Carles Puyol has played more than any other defender in the league – 348 times in all.