After two league games at the Camp Nou, Pep Guardiola’s team have already chalked up 13 goals, with the 5-0 win over Villarreal and Saturday night’s win over Osasuna, starting their title defence with a real bang. 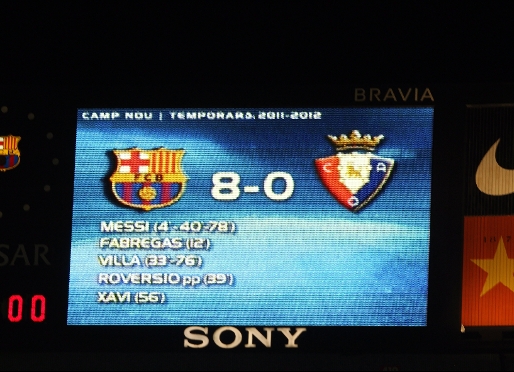 With the international break in between the two games, the Camp Nou fans had to wait 19 days between the Villarreal and Osasuna matches, but it was certainly worth the wait. In both games, Barça have reached fantastic heights with 13 goals, split between Messi (5), Cesc (2), Villa (2), Thiago, Alexis, Xavi and a single own goal against Osasuna. The team are currently averaging an astonishing league goal every 14 minutes at the Camp Nou this season. 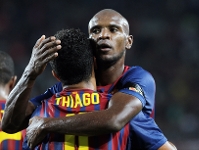 It’s not just that they have scored so many either –the team have yet to concede at home, despite going into both games with a three-man defence. That has allowed Guardiola to flood the midfield with creative talent to set up the scoring, with special mention due to Cesc, who has given 5 assists and has already shown a great understanding with Messi.

The eight goals against Osasuna follow on from the same score Guardiola’s team managed last season in Almeria – a result that lost the Almeria boss Juanma Lillo his job.