The BarÁa manager has defended his teamís methods against Real Sociedad and AC Milan despite the results. ďI only expect my players to behave like they have done these last few daysĒ, he said.

The style is not negotiable. Josep Guardiola has said that neither the setbacks against Real Sociedad and AC Milan, nor a possible bad result against Osasuna on Saturday, are any reason to doubt the BarÁa style. “If we don’t play well, we can’t win. And sometimes you play well and still don’t win” he said. “I promise we’ll play like we did against Real Sociedad and AC Milan. Against the Italians, we shot 23 times, had 70% of the possession and played to win. I just hope my players behave like they have done these last few days.”

That’s all Guardiola is promising. Nothing else. “I haven’t got the strength to promise titles. I’m not promising we’ll win anything this year. Things are won step by step, with a lot of effort and a lot of work. Right now we are only candidates like the other 19 teams are” he added. 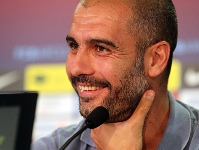 But Guardiola is also aware that he will get some criticism after drawing two games in a week. “At the moment we don’t think anyone can beat Usain Bolt, but somebody will one day. And maybe somebody will win 13 titles out of 15 and beat our 12 out of 15, and then demands will be made of them like they are of us. After winning so much, standards are raised and also the demands”.

Impressed with MendilŪbar and Busquets

But what really matters is Saturday’s game with Osasuna. “MendilŪbar, both at Valladolid and now with Osasuna, is not a manager who speculates. He changes very little whoever the opposition are. He creates pressure, he’s aggressive, and his teams have always caused us problems. MendilŪbar is a manager who gets his personality across and I suppose something similar will happen on Saturday” he said.

Guardiola also used the press conference to justify his decision to play Sergio Busquets at centre back. “In the 5-0 win against Villarreal, Busquets was a great centre back, and now they’re saying he’s useless. I didn’t tell him to chase down Pato, but to divide the ball well. We need him, just like we need Valdťs”.