After only six official matches, no fewer than eight Barça players have already got at least one goal. Strikers Messi, Villa, Pedro and Alexis, and midfielders Cesc, Iniesta, Xavi and Thiago have all found the target. 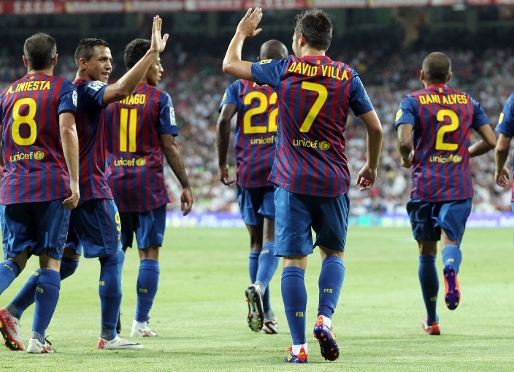 To date, Barça have played three Supercup matches against Real Madrid (twice) and Porto, plus two Liga games and the Champions league opener against AC Milan. The sixteen FCB goals in these matches have been scored by eight different players, and it is not just the strikers that have been finding the net.

Leo Messi has started this season as he ended the last, and is the side’s top scorer with six already. Cesc Fŕbregas has settled in well, and has already got three in his account. Villa has scored two absolute peaches, and five other players have scored once, including newcomer Alexis Sánchez, who scored his first goal for the club against Villarreal.

Last season was an amazing season in the goalscoring department. No fewer than 23 different Barça players scored at least one goal, including five players that usually turned out for Barça B. The only outfield player in the first team that didn’t get any goals was Javier Mascherano.