Four weeks after it was supposed to start, La Liga reaches its second round of game this weekend with big games at Valencia and Villarreal, as well as home debuts for Real Madrid, Betis and Espanyol amongst others. 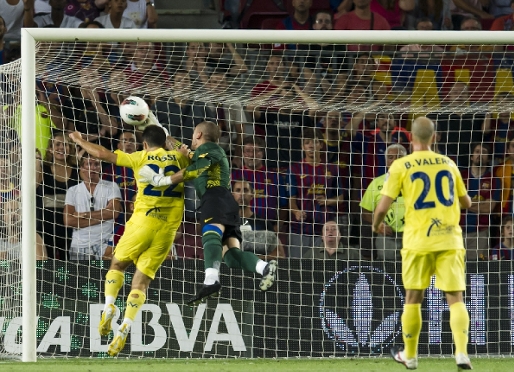 There was plenty to talk about after the first weekend of games a fortnight ago, but the international break last week means that for many observers, including Pep Guardiola himself, La Liga really begins this weekend.

Valencia get their second home game on the run when they entertain Atletico Madrid on Saturday night, following their opening day win against Racing. Forty-million-Euro summer signing Falcao looks set to start for the visitors, alongside fellow new boy Adrian who need to get any challenge they are to make back on track after a disappointing goalless draw against Osasuna in their first game. For Valencia, Roberto Soldado, who bagged a hat trick against Racing, will be the man threat for Valencia, whose boss Unai Emery admitted this week: “Barēa and Real Madrid are the two best teams in the world and it’s frustrating for us that we cannot match them.

Villarreal need to bounce back

Villarreal and Seville are two other teams who will be aiming to at the very least chase the big two and they meet at El Madrigal in the weekend’s opener( 18.00 –the same time as Barēa’s game in Anoeta). Seville’s boss Marcelino insists: “Villarreal’s defeat against Barēa doesn’t change anything – they are still a very good team”. Alvaro Negredo got a brace in week one and repeated that for Spain in midweek and he’ll no doubt be looking for more against Villarreal –particularly since their Colombian defender Cristian Zapata is still stranded in the USA after visa problems.

Real Madrid also have their first league game at the Bernabeu on Saturday evening, when they take on near neighbours Getafe, who come into the game with seven players out injured or unavailable, whilst Mourinho will again be without Sami Khedira. The other Madrid team in La Liga, Rayo Vallecano, will be looking to build on the point they took from San Mames when they entertain Zaragoza on Sunday, whilst Bilbao visit Espanyol who have the 35-year old veteran Walter Pandiani back at the club to make up for the losses of Osvaldo and Luis Garcia.

The head of Betis’ medical services expressed his concerns about the heat ahead of Sunday’s noon kick off against Mallorca – but is mainly worried about the supporters rather than the players: “with 40ŗ temperatures and sat in a cement stadium, it can be very dangerous”. Team manager Pepe Mel was also unhappy with the kick off time: “they put these games on at 12.00 so that viewers in Asia can watch Barēa or Real Madrid –but it’s teams like us who play at this time”.

Granada and Malaga both play their second Andalucķa derby of the season on Monday night when they meet at La Rosaleda on Monday night. The hosts will again be without Julio Baptista as they attempt to get their first points of a season, with their collection of big signings trying to gel more successfully than in their opener against Seville.