Alves: "Leagues are won and lost at grounds like Saturday’s”

The FC Barcelona Brazilian full-back believes that the title won’t be decided only in the games against their more direct rivals, and highly values the games like the one this weekend against Real Sociedad.

"Although, in general, people think that the Leagues are decided in the games against the major rivals, I’d rather think that the League can be won or lost at grounds such as this Saturday". These are the words of Daniel Alves, who, at a press conference this Wednesday, wished to emphasise the importance of the match against Real Sociedad on Saturday. For Alves, it’s not just the Barēa-Madrid matches that will decide who wins the League, and he used the last trip to Real Sociedad as an example, where Barēa lost 2-1 towards the end of the season.

Ready for the match

Alves also made it quite clear that the team is in great shape for Saturday’s game, and that the international games played over the past week won’t affect the performances of the Barcelona International players. "I think we've all come back in good shape. In my case, I played on Monday, and I’ve had time to rest and come back okay. We have enough days left to focus on the next game". 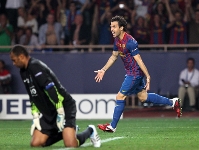 With regard to the integration of the two new players, Cesc and Alexis, Alves explained that it couldn’t have gone any better. "Cesc’s adaptation is no surprise to us. He already knew how Barēa operated. He’d been here a long time. Alexis is from another country and another League, and it did surprise us a bit how well he’s integrated into the team. He’s a star and stars integrate with the group quickly. Alexis is one of those players who has a lot of fun with his teammates He’s very lively and spontaneous. We’re all delighted with them both" said Alves.

Puyol and the level of the squad

Puyol has been training with the other players for some days now. For Alves, this is great news, because "we all know he’s a fantastic character, and he’s vital to the team". Alves believes, however, that the level of the squad is so high "that if Puyol is missing, or Alves, or someone else, in the end it’s hardly noticeable…… the bar is set very high" he said.

"I want to hang up my boots here" 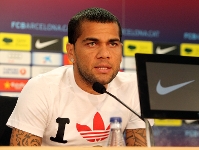 About the rumors of a summer move to Anzhi, the Russian team who have signed former Barcelona player, Samuel Eto'o, Alves said this: "The rumors of their interest in me weren’t completely false. But it's not about money, because if it was I wouldn’t be here. I think the Barēa project will go on for a long time and I want to be part of it. If I see that this project doesn’t fit into my plans, I’ll probably have to leave, but my dream is to hang up my boots here".

Alves also gave his opinion on his Brazilian teammate, Neymar, linked by some of the media with Barēa: "You know what I think about him. I have a weakness for him, I’m his friend, and I’d like to have him by my side, but it’s his future and he’ll decide where to go. I wish him all the luck in the world".