Cesc and Alexis both scored on their league debuts on Monday night repeating the feat of Giuly and Eto’o at the start of the 04/05 season and joining players such Villa and Ibrahimovic, who scored in their first games. 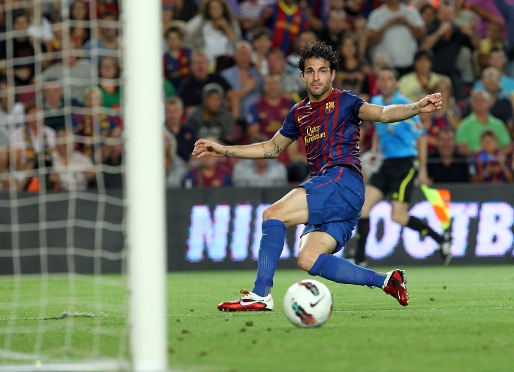 Although he’s scored for the first team before, Thiago Alcántara could also celebrate his first league goal as a full first team squad member with his strike against Villarreal – Guardiola’s team’s third summer addition to get a goal in the first game of the season.
Both of Barça’s summer signings hit the ground running on their league debuts, with Fabregas getting on the scoresheet first and then Alexis getting in on the act.

In Frank Rijkaard’s second season at the Club, the same thing happened, with both Ludovic Giuly, signed from Monaco and Samuel Eto’o, brought in from Mallorca in the summer, getting the goals in Barça’s 0-2 win in Santander.

Zlatan Ibrahimovic and David Villa also marked their league debuts with goals, with the Swede getting the third in the 3-0 win over Sporting at the Camp Nou in 2009-10 and David Villa was also on the mark, rounding off the win at Racing last season.