The month of August has witnessed some authentic Barcelona victories. The last five games that Barēa played have included wins against Real Madrid, Naples, Porto and Villareal, four teams that are playing in the Champions League this season. 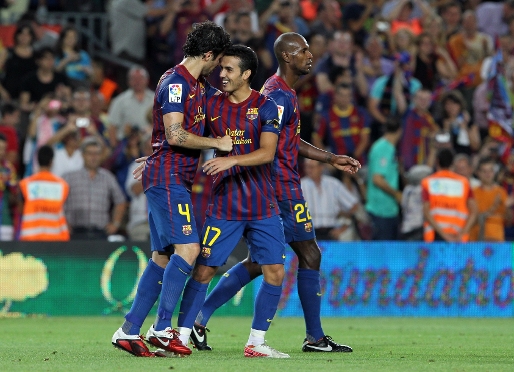 Barēa started the 2011-2012 season with a main course, the Spanish Super Cup, and a “Classic” against Real Madrid.
The first leg at the Santiago Bernabeu, where Guardiola’s men drew 2-2 in a hard fought match, with goals from Villa and Lionel Messi, was used to start to get the legs into shape, and also marked the debut of Barca’s first Chilean player, Alexis Sanchez.
On 17th of August 2011, the Camp Nou witnessed the winning of the first title of the season. An Iniesta goal opened the scoring, and two goals from Messi were enough to overcome the goals from Cristiano Ronaldo and Benzema. Moreover, this game would have special meaning for the new Barēa number 4, Cesc Fabregas, who played his first game in a Barēa shirt.

Barēa brilliant in the Gamper

From there, wins have been coming one after the other. Naples were the rivals in the Joan Gamper Trophy, the official presentation of this great Barēa team. The players achieved their first big win of the season, 5-0. Cesc Fabregas scored the first goal, and his first for Barēa. The other 4 goals were scored by Keita, Pedro, and Leo Messi, with another 2.
After the Gamper, Barēa travelled to one of the more glamorous cities, Monaco, to play for their second title of the season, the European Super Cup, against Porto. A goal from Messi in the 38th minute and another from Cesc in the 87th, were enough to crown Barēa, Super Champions of Europe.

First game in the League with a big win against Villarreal

The Camp Nou was again witness to another big win against a team that will be playing in the Champions League, Villareal. Gambling on a 3-4-3 formation, the players decided the game with a 5-0 victory, in an exhibition that helped Thiago, Alexis Sanchez, and Fįbregas reaffirm why Barcelona signed them. Their 3 goals, along with another 2 from Leo Messi, demonstrated Barēa’s most competitive side, which, despite having won everything, remains intact, and the team have the same desire to continue making history.