Spanish League Round Up Week 2

Spanish League Round Up Week 2

La Liga 2011-12 kicked off this weekend with 30 goals in ten games, two hat tricks, a win for newly promoted Betis and ominous defeats for Zaragoza and Espanyol. 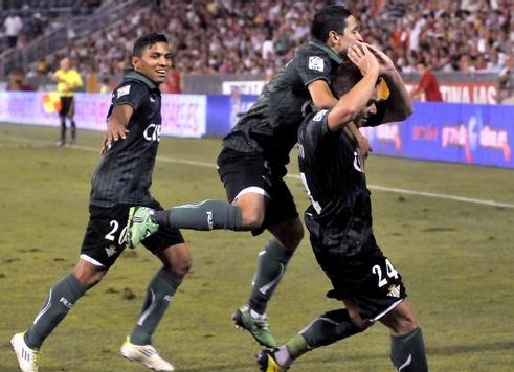 Real Madrid bounced back from their defeat in the Spanish Super Cup to thrash a very poor Zaragoza 0-6 on Sunday night. The Zaragoza manager Javier Aguirre assumed full responsibility, telling reporters after the game: “ I don’t know what conclusions to draw –but it is my fault”.
After the league was delayed for a week because of the players’ strike, it finally got underway this weekend – though there is now a week’s break for international games, with the next round not due for a fortnight.

Roberto Soldado made a dream start to the season in Valencia’s opener against Racing – scoring after just one minute. Although he somewhat blotted his copybook with an own goal soon after, he grabbed two more in the final minutes at the right end to help Valencia fight back from 1-3 down to win 4-3 and take the points. Alvaro Negredo was also on target for Seville, getting both goals in their 2-1 win over Malaga, whose collection of new signings failed to gel, though Santi Cazorla pulled one back with a lovely free kick late on.

Betis start with a win

Betis won their first game back in the big time, but they left it late with Ruben Castro grabbing the winner in Granada two minutes from time, as the Seville team showed a lack of fire power that new signing Roque Santa Cruz will be expected to help put right. Mallorca and Real Sociedad also got off to winning starts, with Laudrup’s team overcoming a conservative Espanyol 1-0 thanks to a massively deflected shot from De Guzman and the Basques beating Sporting with two goals from Imanol Agirretxe, including the first of the 2011-12 season on 34 minutes.

The only game without a goal was the Sunday lunchtime match between Atletico and Osasuna, where the hosts missed Forlan –who signed for Inter on Monday – and new signing Falcao –who was still missing his paperwork- and looked pretty toothless up front. Osasuna had to change keepers before half time after an injury to Asier Riesgo, but his replacement Fernandez made some great stops to keep out the Madrid team. Finally, Getafe and Llevant drew 1-1 in Madrid, whilst Rayo earned a valuable point with the same result in San Mames