Guardiola: "With different types of defenders we couldnĺt have played like that"

Whilst recognising that playing with three defenders against a team as dangerous as Villareal might have been a risk, Guardiola stressed that the quality of his players was the key for having dared to do just that. 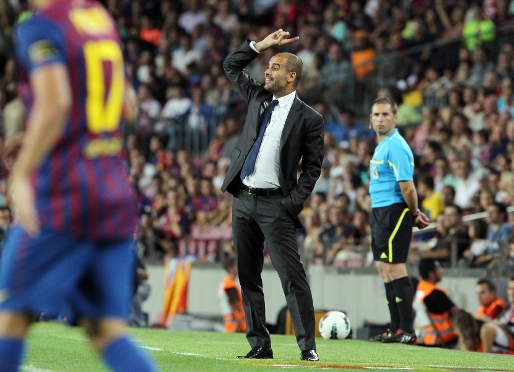 Bartomeu: "They are ecstatic"

Following Barša’s 5-0 win against Villarreal, the first vice president emphasised the ambition the players showed on the pitch: "This is a really ambitious team. They’ve won the European Super Cup and the Spanish Super Cup, and it’s been a really tiring August. We have a lot to thank them for. They are ecstatic". Along the same lines, Bartomeu recalled that last Friday Barša were playing the final of the European Super Cup, which meant they had to make an extra effort to be ready for the match on Monday: "It was a fantastic game. The team came from winning the European Super Cup. We ought to thank the coaching staff and the players for their efforts today. It would have been normal that on Monday they might have been a bit relaxed, but not at all. They were so motivated".

On the other hand, Bartomeu wished to highlight the performances of three players who managed to score tonight: "Alexis, Thiago, and Cesc, all started tonight, and all three scored. We must recognise how quickly they’ve adapted, and how well they’re playing".

At the press conference after the match against Villareal, Josep Guardiola explained his tactical approach to FC Barcelona’s first game in the League. The manager began by analysing the game with regard to the wingers, when playing with three defenders: "When you don’t play with full-backs, the wingers have to be a little more static, and more patient. We had only one natural defender, Abidal, and we decided to play like we did. The idea was to have control of the ball, play the ball out of defence, pack the midfield, and move the ball around a lot".

It was an approach which had a very positive result: "We played an unbelievable game, which in my opinion is the end of the preseason, as I think that the season starts when the players return from the matches with their respective National teams. We played really well against a Villarreal team that has always given us lots of problems. I want to again congratulate each player, because I’m very pleased with the performance of all of them".
When asked if, in the case that he’d had everybody available, he would have opted for a 3 man defence, Guardiola was pretty clear: "It depends a little bit on everything. If I’d had all the players available, I’m not sure what would have happened. In this club I’ve always thought that good football comes from the midfielders, and we are lucky to have quite a few very good ones".

Insisting on the 3 man defence, the manager recognised that "it was a risk to play like that, because we hadn’t prepared too much. We explained three or four concepts, and once again they’ve proved to be very good players and really smart, and they did everything very well. They had to be calm at the back, and Mascherano and Sergio Busquets were just that. The job of the manager is to know his players and their qualities. With other types of defenders we couldn’t have played like that".

Guardiola also stressed the high level of possession that Barša maintained throughout the game: "We’ve gone, I don’t know, 180 or 190 games with more possession than our opponents, and that’s a significant figure against a team with the quality of Villareal……..playing with three defenders against Nilmar and Rossi is always dangerous, but it went well" he said.

One of this season’s new signings, Cesc Fabregas scored again tonight, against Villareal. Guardiola mentioned this, saying: "You always hope that a new signing fits in well. In Cesc’s case, he combines 2 very good things. The first is that he knows the club and some of his teammates very well, and the second is that he was captain of Arsenal at a very young age, and he’s developed a really strong personality. We knew he just had to get used to the rhythm, and bit by bit everything would fall into place”.

About the tandem that Cesc has formed with Lionel Messi, Guardiola said "they look for each other, and find each other", although at the same time he wanted to emphasise the role of players like Thiago, Iniesta, and Keita. "In the end it’s the feeling in the style of play that gives you confidence for the future. They all run, and know how to pass to a teammate, and this is key" he added.
Another player who shone was Alexis, who scored his first goal for Barša on his official debut at the Camp Nou. "It’s never easy to come to this stadium and play like he did. The truth is that we’ve already seen what he’s capable of. As always, we must give him time. He’s a young man who is now the joy of the dressing room, and is beginning to be loved. As always, if anything bothers him, we’re here to help".

A team that always responds

Finally, Guardiola didn’t want to go as far as to assess whether this was the best game Barša have played since he took over the team: "I think we played really well, and we’re very happy. Coming from where we came from, and the efforts of the 2 Super Cups, the team once again responded really well. This gives us that extra confidence, to take the next step forward". Once again he praised his players: "For all that I might tell them, if it doesn’t come from within themselves, then things won’t go well. A lot of them have been here many years and know that minor details can cost them everything. Most times I don’t have to tell them what to do, because they know already. They’re the stars, the ones who make people happy".