"Starting off winning gives you confidence"

Guardiola is focusing on the League debut against Villarreal, "a good all round team". The Barēa Manager explained that Puyol and Maxwell are about ready to reappear, but he’s not tempted to bring them back too early.

The next objective of the insatiable Pep Guardiola is clear: "Starting off winning gives you confidence, it’s important". Pep, recent Champion of the Spanish Super Cup and European Super Cup, is now concentrated on the League debut on Monday against Villarreal: "The first game is always a bit special. Furthermore, we know that Villareal have always caused us problems. They are a Champions League side". Guardiola stressed that, following their efforts in Monaco, the team need the fans to "give them a hand".

Not at all concerned about the team relaxing 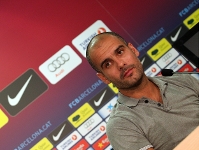 In the press conference prior to the match, Guardiola said he was worried more about "tiredness than relaxation" of his players. "The players know that they’re up against a team that can give us lots of problems" he added. On top of that Guardiola said "The League forces you to make a real mental effort and lots of work to do it all over again". Once again he predicts that Barcēa’s great rival, Real Madrid, "will drop very few points….we know their potential, so it’s important that we win".

Alternatives to the absentees

Against Villarreal, Guardiola will be missing up to five defenders. With regard to this, he said: "We have three full-backs missing, but there are alternatives, like changing players positions. I have great faith in the team that will play tomorrow". He also referred to the recovery of Carlos Puyol, who trained the last two sessions with the group. "The sensations are all good. He’s very close, but we can’t rush things after all that he’s gone through". In the same vein he said about Maxwell that: "He’s close to getting the all clear, but we’ll wait until after the international break".

Focusing on Monday’s opponents, Villarreal, Guardiola believes that "being in the Champions League will give them peace of mind and confidence for the whole season. Since Pellegrini’s days they’ve played with a similar style, they have two great players up front, lots of experience, and a very reliable goalkeeper ... they’re a good all round team". Finally, with regard to Barēa’s possible interest in striker Giuseppe Rossi, he admitted that: "Every team in the world would be interested in Rossi, including FC Barcelona. I think he’d fit perfectly into our style of play, because he’s a superlative player, but we needed a wide player more".