The players strike which meant that last week’s scheduled opening game at Malaga was cancelled means that Barça open their league campaign at home (on Monday against Villarreal) for only the second time in the last10 years. 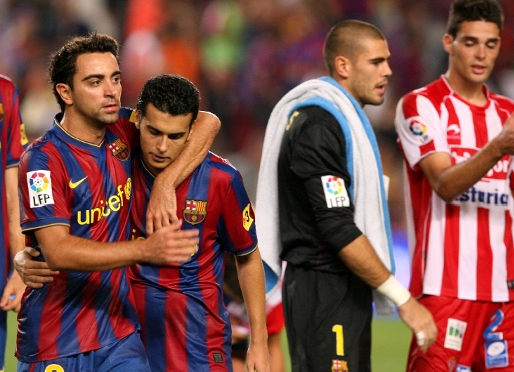 The last time the Club lost an opening day fixture at home was way back on December 3rd 1939 against Espanyol at Les Corts, when Mora, Rosalench, Sospedra, Herrerita and Emilín’s Barça went down 0-1. The first time that Barça opened a season at home was 10 years earlier when they beat Real Sociedad 3-0.

The team have great scoring record in the first games of the season, both at Les Corts and at the Camp Nou, with an average of just less than 3 goals a game in the 32 wins, 4 draws and just that one defeat, with less than a goal a game conceded.

Real Sociedad were not just the first team Barça beat on an opening day at Les Corts, they are also the club who have featured most times in the fixture, with Barça opening their league campaigns against the Basques on eight occasions. In the 50/51 opener, with Ferdinand Daucik in charge, Barça ran out 8-2 winners, thanks to 4 goals from César, 2 by Basora and one each from Aloy and Szegedi for what remains the highest opening day score.

The last time the team began the league at home was two seasons ago when goals from Bojan, Keita and Ibrahimovic saw them brush aside Sporting Gijon. Before that, in 2003, Victor Valdes made his league debut in the opener against Atletico Madrid which ended in a draw.