Puyol starts full training with the rest of the squad

Captain Carles Puyol joined in with the rest of the squad in training on Saturday and maintained the same rhythm as the rest of the players –the first time he’s been able to train properly since his operation in June. 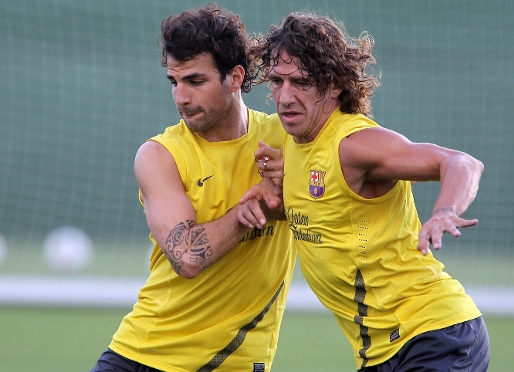 More info
After arriving at the Barcelona airport at noon today, following their European Super Cup victory in Monaco, the squad reported for training this evening to begin preparation for Monday’s game against Villarreal.

The squad were boosted by the presence of Puyol who for the first time since he was operated on for a knee injury in June, took a full part in the session.

The players who featured against Porto did some gentle work to recover from the game and the whole squad will be back for training on Sunday at seven in the evening, after which Pep Guardiola will hold a press conference(live on Barēa TV).

Dani Alves will miss Monday’s game after picking up a yellow card in the last game of last season against Malaga to fulfil his quota of bookings and the suspension was passed over to the first game of this season, which after last week’s game was cancelled, will be against Villarreal.