MVP Iniesta: “it looks easy, but it isn’t”

MVP Iniesta: “it looks easy, but it isn’t”

UEFA chose Andrés Iniesta as the Super Cup’s MVP and after the game the Barça midfielder stressed: “with all the success we’ve had over the last few seasons, it may all look easy –but it really isn’t”.

He may not have scored, or even given as assist for a goal, but Andres Iniesta won the Man of the Match award in the European Super Cup final after a majestic performance. After the game he stressed the importance of this latest title for the Club: “we have to give it the value it deserves because of what it takes to win it. It’s a game between the European Champions and the Europa League winners. With all the success we’ve had over the last few seasons, it may all look easy –but it really isn’t. We were up against a great team –Porto won virtually everything with ease last season”.

Below are some of the post match comments from other Barça players: 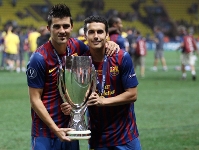 “Messi is superior to anybody he comes up against”

“I’ve been at the Club for just over a year and I’ve picked up five titles! Now I have to keep on working to keep that run happening”.

“I don’t know if I’ll end up playing at centre half - I’ll play where I have to”.

“I never imagined that I’d win four trophies in my first year at the Club and I want to thank everyone here for that”.

“I’m very happy to have won this title against a great opponent”.

“12 titles out of 15 is a brutal stat. We are very happy with the start we’ve made, winning both Spanish and European Super Cups”.

“We hope we are in for another great season”

“The fans are really behind us and that helps us to find strength where we wouldn’t otherwise have it. This Barça is a great family”.

“We knew it would be a tough game. Porto won virtually everything, but we have a maturity as a team that lets us keep our cool when things don’t go so well”.

“We have to follow Guardiola. He knows the Club and the players. He’s been here as a player and a manager”.