The Argentinian, who topped the goalscoring charts in the last edition of the Champions League has beaten Cristiano Ronaldo and Xavi to win the award.

More info
53 reporters from different media and countries have decided that Leo Messi was the best player in UEFA club competitions last year, and he thus becomes the first ever winner of the award. The announcement was made shortly after the Champions League draw, with the winner pipping team mate Xavi Hernández and Cristiano Ronaldo of Real Madrid to the honour. Iniesta and Piqué came fourth and ninth respectively. 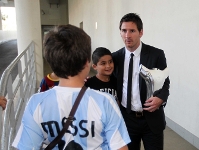 Speaking after collecting the award, Messi said “I want to share this with my colleagues as it is thanks to them that I win these trophies … I am very lucky to have such good players at my side and it is them who give me the opportunity to score so many goals. The merit is everyone’s.” He added that the hunger to win among the Barça squad is one of the reasons for their ongoing success.

Before the winner was announced, Xavi showed his usual generosity when saying that “Messi is the best footballer in the world at the moment”, something he has been saying for years. He also felt that FC Barcelona is experiencing “one of the best moments in its history”. 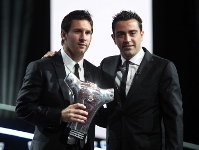 This is just the latest of many awards to have been won by Leo Messi. He has already won a FIFA World Player (2009) and two Ballons d’Or (2009 and 2010), the last of which was after the two awards were unified. He also been top goalscorer both in Spain and Europe in 2009/10. “I have all my trophies at home, both the individual and team ones” he said.