Pep Guardiola has nothing but praise for Porto, BarÁaís opponent in the European Supercup, and doesnít want the shortage of defenders or the poor state of the pitch to serve as excuses.

“It is an excellent final between two teams that deserve it” said Guardiola in his pre-match press conference. “We won the right to be here by winning the Champions League, and that’s what counts. We have had just enough time to prepare. At first we were worried about getting ready for the Spanish Supercup and having this game so soon after”.

Guardiola didn’t want to rue on the absence of his centre backs Puyol and Piquť, nor the state of the pitch in the Louis II. “We are lucky to be here and we have to think of the difficulties as a challenge. We always get through and we have to make sure this time is no exception”. 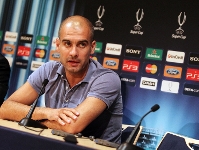 The BarÁa manager has also had a good look at Friday’s opponent. “They are a team that comes at you with intensity, they play well up front and all know how to play good football. There is a lot of sense to what they do. We’d love to do the things they do … They change players and managers and keep on winning. Last year they won the league without losing a match. It’s a very strong team, in all senses, they are well put together. We’ll have to perform very well to beat them”.

As for his own team’s approach, he said “we always go out one hundred per cent. When you play in finals you wonder if you’ll ever get the chance again. In part we have to enjoy it and in part we have to suffer.” As for fitness, he said “we are better than we were ten days ago but poorer than we will be ten days from now. You can’t expect to be at your peak at this stage because there’s a lot of competition ahead. If we were able to overcome such a tough test as Madrid then we have to go into tomorrow’s match believing we can win it”.

It was announced today that MartŪn Montoya has been picked to play for Spain. Said the FCB manager, “I was surprised. For a B team player to be picked for the national team is a very nice surprise. I know they’ll treat him well and he won’t feel alone”.