Cesc: “They have a similar style to our own”

Pedro and Fŕbregas agreed that Barça’s opponents on Friday have a great team, and the Catalan thinks they share a similar style of football. 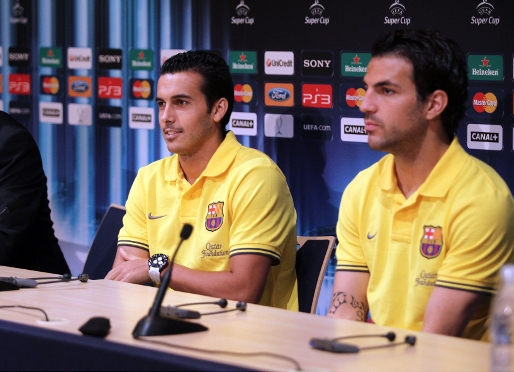 One was the hero of the last European Supercup to be won by Barcelona, Pedro Rodríguez, who scored the winner in 2009 against Shakhtar Donetsk (1-0). The other is about to appear in his first ever continental Supercup match, in just his second outing in an official match for his new club, Cesc Fŕbregas, which could bring his second Barça title in as many games! But both players know that Porto will provide stern opposition and that it will be anything but easy to get their hands on the coveted trophy.

Cesc explained that “this is my first trip away with the team and I’m happy to form part of this great squad. Until now, they have treated me very well. I don’t know if we’ll win or lose, but with this team we can go all the way”.

Speaking about Porto, Cesc said “I think they have a similar style to our own. They like to hold onto the ball and don’t to play long balls. They play well and it’ll be hard. We know they won everything last year and they scored five goals against Villarreal in 45 minutes”.

Fŕbregas was also pleased that Arsenal won away to Udinese last night to secure a place in this evening’s Champions League draw in Monaco.

The press conferences also produced a series of questions relating to the sad incidents at the end of the Spanish Supercup match. Both Pedro and Cesc said they would rather forget all that and concentrate instead on Friday’s game with Porto. “Enough has already been said about the Spanish Supercup”, said Cesc.

It was announced today that Montoya has been picked for the full international Spain squad. Pedro, unlike Guardiola, did not think it was a surprise. “He has been playing very well in the youth teams. He’s very good at defending, can cover a lot of ground and plays the ball well. It’s great, I know him very well, and I’m really happy.”