20 year old Barça B full back Martín Montoya has been selected by Vicente del Bosque in the squad for the forthcoming Spain matches. As many as nine Barça players have been picked. 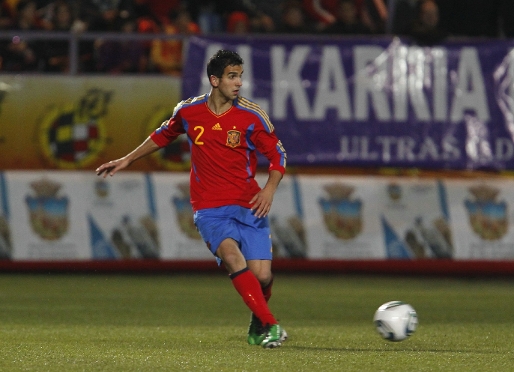 FC Barcelona is once against the club providing most of the players to Del Bosque, who on Thursday named the 24 players he’ll be using for the friendly against Chile and the Euro 2012 qualifier against Liechtenstein. There are nine Barça players on the list: Valdés, Montoya, Busquets, Xavi, Thiago, Cesc, Iniesta, Pedro and Villa. Puyol and Piqué, who also usually feature in Spanish squads are both out through injury.

Martín Montoya is one of the six players who win the European Under 21 Championship. Another is Barça youth product Alberto Botía, who is now at Sporting Gijón. It is incredible to see how many players from La Masia are making it through to international level. “We are interested in looking at the new lads that have already shown their class in the youth teams”, said Del Bosque.

Four picked for Under 21

Luis Milla also named his squad for the Under 21 matches, and FC Barcelona will be supplying Bartra, Planas, Tello and Sergi Roberto, the latter of whom has just renewed his contract with the club until 2015.