The new Barša midfielder stresses that Xavi still has lots of years left, and that he can see himself "playing and winning with Xaviůůmy best years are starting now", and Guardiola "will get the best out of me".

Cesc arrived at the Barša TV studios with a smile from ear to ear. Following the most drawn out transfer in World football, he looked relieved, but mainly very happy. It’s how the new Barša number 4 feels, and hopes it’ll carry on for many years. In a long conversation, Cesc explained his feelings as a new Barša player.

How does it feel? Like a release?
"The last months I’ve been under a lot of pressure. Mentally it’s really tiring, but it finally happened and I’m very happy to be back at Barša".

Did you ever imagine that coming back home would be so complicated? That the process would be so long?
"It is partly my fault for having left. Not in my wildest dreams had I imagined that one day I would play for the Barša first team. Not as a child, nor playing with Arsenal had I thought I’d live a day like Monday". 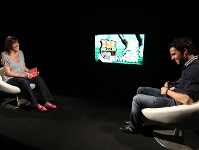 In your presentation, you said that Wenger was like a Father to you. You do understand that many Barša fans don’t have much time for the French manager?
"I think the image of Wenger here is a bit mistaken. If I’m here today it‘s, at a high percentage, thanks to him. He makes the decisions, and told me I could come. It's he who took the lead in the negotiations. Thanks to Wenger I am now a Barša player”.

It’s been a long time, but why did you leave Barša in 2003?
"I saw that I didn’t have any chance of getting into the first team and Xavi was very young at that time. Also there was Andres and some of the youth players who were far ahead of me, and I saw that I was well behind them. I thought it was funny that an English team like Arsenal were asking about me, and I was amazed that the first team manager, Arsene Wenger, cut his holidays short to come and see me. I was 16 and playing for Barša juniors. The offer they made me was brutal".

We know that Barša is your lifetime club, but why have you decided to come back now?
"The easiest thing would have been to stay at Arsenal. I’m the captain, playing every game. We are always in the Champions League, always fighting for titles. For all that, and the tough competition here, perhaps now might be the worst time to return to Barša. It’s going to be really tough to make the starting 11, but I needed a new challenge in my life. I thought I’d stagnated a bit, and needed a change of scenery. I needed a special motivation to bring the best out of myself".

Your involvement has been admirable and Barša have made a great effort to sign you. But above all, it was Guardiola who wanted you. What does that mean to you?
"It's the key. I know I can learn a lot from Pep and my teammates. I know they’ll bring the best out of me. On top of that there are many tactical and technical aspects that will make me better in this team".

10 years ago you thought there was no one who could think as fast as Pep on the field. Do you still think the same, or that Cesc has bettered that?
"Not at all!. There are also two before me who think very fast, like Xavi and AndrÚs, and they’ve demonstrated that fact. They are 2 stars on and off the field. Pep has always been a reference for me, but now they are both the benchmark". 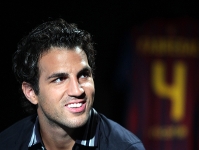 Many years ago Pep dedicated a shirt to you which read "you’ll be the Barša number '4'. How did the story go?
"My parents separated when I was 13 or 14. I went to play in a tournament in Valladolid or Italy, I don’t remember very well. I was a bit depressed about the separation. I was having a bad time, and my manager, Rodolf Borrell, a fantastic person, came and told me that he’d heard that he was going to give me this shirt. It's a great coincidence, an anecdote. My father has kept the shirt. I’ll treasure it forever".

You were part of a great generation, that of 87. You’ll be back playing with Messi and Pique. When you were young, did you speak about one day becoming first team players?
"We played some very good championships with that team and we were very together. They were the best years of my life. But talking about it, no we didn’t. I don’t think that any of the three of us ever imagined that one day we’d play together in the first team".

What remains of that Cesc who left at 16? Or is the Cesc of today a product of Wenger?
"I think that Cesc has changed very little. I have improved in some ways, but I’ve always been willing to work hard, and that's what’s helped me to improve every day. I am always keen to learn. It's a mistake to think you know it all or you are better than others".

How do you think it will be, working every day with your great friends Puyol and Pique?
"Special. It’s what I really wanted. They are great friends and I have other great friends in this dressing room. But it’s also true that I lived with them via the national team in European Championships and World Cups. For me it will be a brutal experience, and they’ll certainly help to get the best out of me".

Have the "oh oh!! and moooc moc" on Twitter finished?
"Certainly not. Now we’ll do it more often (laughs)".

You’ve known Gerard since childhood, but Carles Puyol less time, and he’s become an important person to you.
"For me Carles is an amazing person. Last year in the World Cup I was having a really bad time, and he was in my room every day encouraging me. And finally, I came on in the World Cup Final, it all ended well and he said to me 'do you see that you have to have more confidence in yourself?’. He’s a captain on and off the field, due to his personality and his humility. I’ve met very few people like him in football". 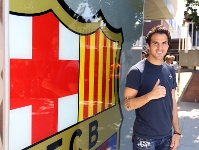 With your signing does Barša now have the best midfield in the history of the club?
"Time will tell, depending on results and performances on the pitch. Thiago and myself have come this year, hopefully to offer more quality, and more competition. Together we’ll be a great group. It doesn’t matter whether or not it‘s the best ever. The most important thing is that Barša continues performing at the top level, keeps winning titles, and that the fans enjoy it".

You are considered a signing for today, but also for the future?
"I hope so. I’ll work hard to make it happen. I’m very young and the best years of my football career are beginning now, and in the future. I still have a lot to learn and hope to mature with Barša for many years to come".

There’s a surplus of players in midfield. Do you think that everyone has a different profile and can provide different solutions?
"Exactly. We are players that understand football the same way, yet we’re quite different. More than people think. Together we make a very good combination and at a footballing level that’s great, but we have to prove that on the pitch. We understand football the same way, but we all have different characteristics, which might just make us a very special group".

Many years ago it was said that Xavi would take over from Guardiola. Is Cesc Xavi’s heir apparent?
"I don’t know. I think that Xavi still has some years left in him, huh! He does things you wouldn’t believe! I haven’t come to retire Xavi. I came here to play with Xavi, to compete with Xavi, and to win with Xavi. What I’m saying about Xavi also goes for Andres and Thiago. I think altogether we make a very good group. I know what we’ll do. With the great group we are, we’ll do great things together".

Will Barša be able to keep winning titles playing with the football style they have in recent years?
"We’ll try but it’ll be difficult. There are teams like Madrid, who have strengthened their team, who’ll want to beat us, and don’t only want to win the League but also want to win the Champions League. There’ll also be Manchester United, Inter, etc. up against us. We’ll have to be very careful, therefore, be very disciplined and work to maximum capacity. We can’t relax. If you relax too much that’s when the problems start".

Which Arsenal memory stays with you?
"It's very complicated, but I guess I’ll remember my debut the most. It was the day when I least expected it. I thought I would make the squad and that's it, and suddenly there I was in the starting 11, and my family was in the stands. It was a really spectacular day".

A curiosity: why have you got Fabregas on the shirt?
"I would normally wear the shirt with Cesc, but it's what I wanted and it’s not that I’m superstitious. In England I had to put Fabregas because the player’s surname has to be displayed and when I made my debut with the national team, they put Cesc on the back and things didn’t go so smoothly. But then, they changed it to Fabregas and we won the European Championships and World Cup. Barša were going to put Cesc on the shirt, but I thought 'if everything has gone well with Fabregas, then we should continue with Fabregas and carry on winning trophies".

I thought you were going to say it was the right thing to do because not everyone can pronounce your name well.
"No, it’s not because of that. I let everyone call me what they want. I can’t do anything about it, there’s no remedy. At least I know they’re talking to me. It doesn’t matter. It's a funny story and nothing more".