Alves: “This Supercup was vital”

Alves: “This Supercup was vital”

Dani Alves told the ‘El Marcador’ show on Barça TV that it was vital for both teams to win the first title of the season. “Great expectations had been created” he said.

Dani Alves went on to say that “it looked like Madrid would win this title because they had a great preseason” and FC Barcelona were not in such good physical condition. “Perhaps we were less ready than they were, but we’ve got a lot of quality here”, explaining can almost automatically produce good football. They have learned their lesson well, and were still able to produce moments of sublime brilliance despite so few training sessions together.

Alves was one of Barça’s best players against Madrid. He didn’t join many attacking moves but instead concentrated on stopping Cristiano Ronaldo runs to the extent that the Portuguese star showed signs of desperation. “They normally attack a lot down my wing so against Madrid I usually play more defensively, because their counter attacks are so quick”, he told Barça TV. 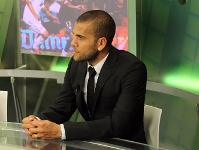 On the controversy at the end of the match, Alves said “you always have to be super-calm in a game like that, because there’s intensity in your heart and you can make mistakes”. The Brazilian said they have learned a lot from Josep Guardiola in that respect. His point was that “if you have a negative model, you do negative things. If you have a positive model, like Guardiola, who says positive things, who says you have to onto the pitch to compete and play football, it’s much better”.

Knowing how to win and lose

Alves also said that teams at this level have to know how to win and lose. “The best example is the final of the Champions League, against a team of gentlemen like Manchester United. Millions of people are watching and you have to stay calm.” He agrees with Guardiola that it is time to do something, because there is an increasing risk of something even more serious happening. “They could end up doing damage to a fellow professional” he said.

Cesc Fŕbregas made his debut last night and was involved in the winning goal. “Cesc is the Barça type of player, who knows this place well and how it all works. He has only been here three days and has already picked up all the moves. He’ll contribute a lot to the team”.