After eight years not wearing the Barça shirt, Pep Guardiola’s new midfield player was able to do so again on Monday 15th of August, in the Camp Nou, which was open to the public so that the fans could welcome him home.

More info
There was great expectation to see Cesc Fabregas once again wearing the colors of FC Barcelona, an example of this being the large number of supporters who turned up at midday on Monday at the Camp Nou to see Cesc wearing the new Barça shirt, with the number 4 and the name of Fabregas on the back.

With the clock showing 13.30 and with strict English punctuality, Cesc went onto the Camp Nou pitch from the player's tunnel to the sound of the Barça anthem. He had only done that before wearing the Arsenal shirt, when he came to play against Barça, but from now on, instead of doing so as a visitor, he’ll de doing it as a home player. The fans, who from 12.00 had begun to fill the seats of the stadium, received him with resounding applause.

A smile from ear to ear 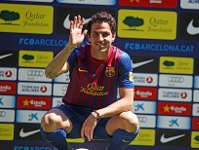 From the first moment Cesc's face showed his great joy at coming home. Under the watchful eye of his family, in the front rows of the grandstand, the new signing from Barcelona greeted the fans, did the usual few tricks with a football, and proudly wore the Barça shirt. A kiss for the club logo, and his hand on his heart as thanks for the support he’s received, gave way to a few words to the fans from Cesc.

Cesc wanted to thank the Barça fans present at the Camp Nou. "I’ve waited many days, many months, and many years for this moment. For me it’s a very special day. I’ve come home after eight years away" said Fabregas. He also wanted to point out that "many of you were disappointed when I left, but I’m back to take up the most difficult challenge of my life".